A Review on Properties, Application, and Analytical Methods of an Antihypertensive Drug efonidipine

Source of support: I am very grateful to Pioneer Pharmacy Degree College for continuous support and giving me strength to do this.

Qualitative and quantitative estimation plays a significant role in ensuring safety and efficacy of drugs in different matrices. A detailed literature survey is one of the most crucial requirement for all research activities. Efonidipine (EFN) is a new antihypertensive agent that inhibits both L-type and T-type calcium channels. It was launched in 1995, under the brand name of Landel, and marketed by Shionogi and Co. On August 28, 2017, the Drug Controller General of India (DCGI) granted the approval of the drug in India under the brand name of Efnocar to Zuventus Healthcare Ltd. This article examines published physical properties, pharmacokinetic data, analytical methods, and clinical trials reported in the literature for the determination of EFN in biological samples and pharmaceutical formulations. They include various techniques such as fluorescence spectroscopy and circular dichroism, thermal analysis, Fourier transform infrared spectroscopy, evolved gas analysis, environmental scanning electron microscopy, X-ray diffraction, spectrophotometry, high-performance liquid chromatography, and LC-MS/MS. There is no marketed formulation available in combination of EFN with other drugs, but recently Ajanta Pharma got approval for the combination of EFN with telmisartan in tablet form.

Efonidipine was launched in 1995, under the brand name of Landel, by Shionogi and Co. On August 28, 2017, the Drug Controller General of India (DCGI) granted approval of this drug in India under the brand name of Efnocar to Zuventus Healthcare Ltd.1–3 It is chemically known as 2-(N-benzylanilino)ethyl 5-(5,5-dimethyl-2-oxo-1,3,2λ4-dioxaphosphinan-2-yl)-2,6-dimethyl-4-(3-nitrophenyl)-1,4-dihydropyridine-3-carboxylate.

The phosphorous moiety at C5 position (Fig. 1) of the dihydropyridine ring is considered to be dominant for the pharmacological profile of the drug. About 10 and 25% of the population is expected to benefit from drug treatment of hypertension, and the exact figure depends on the cutoff value for blood pressure and the age-group considered for active treatment. In less than 95% of cases of hypertension, there is no underlying medical illness to cause high blood pressure. This is called “essential” hypertension. Hypertension is twice common in a person whose parents are suffering from hypertension, so genetic factors play a key role. It is more common in Black people of African region who are also at particular risk of stroke and renal failure. The molecular formula of efonidipine is C34H38N3O7P and molecular weight of efonidipine is 631.7 g/mol.4–9

Efonidipine is a new age-group dihydropyridine calcium channel blocker, which inhibits both L- and T-type of calcium channel. It is highly lipophilic drug that easily penetrate into the phospholipid-rich cell membrane and reaches the dihydropyridine binding site of the calcium channel targets, which inhibits the both L- and T-type calcium channels and leads to vasodilation and decreases the automaticity of the heart as shown in Figure 2. It exerts negative chronotropic effect. Inhibition of T-type calcium channels in the sinoatrial node prolongs the late phase-4 depolarization of SA node action potential and suppresses an elevated heart rate. Efonidipine increases the coronary blood flow by blocking L- and T-type calcium channels and attenuates myocardial ischemia. By reducing synthesis and secretion of aldosterone, it prevents hypertrophy and remodeling of cardiac myocytes. Efonidipine increases glomerular filtration rate without increasing intraglomerular pressure and filtration fraction. This prevents hypertension-induced renal damage. Efonidipine increases excretion of sodium from the kidneys by suppressing aldosterone synthesis and secretion from the adrenal glands. Renal parenchymal fibrosis is induced by aldosterone and suppressed by efonidipine. Efonidipine lowers blood pressure in cerebral resistance vessels and stops hypertension-induced brain damage.

Fig. 2: Site of action of efonidipine

Efonidipine is first metabolized in the liver. The relevant metabolites are N-dephenylated efonidipine (DPH), deaminated efonidipine, and N-debenzylated efonidipine (DBZ). Both DBZ and DPH expose activity as calcium antagonists. The vasodilating properties of DBZ and DPH were about two-thirds and one-third, respectively, than that of the parent compound. Results shows that the majority of the pharmacological effect after oral dosing of efonidipine hydrochloride in human is due to unchanged compound, and its metabolites make a small contribution to the pharmacological effect.

According to recent world health ranking in both male and female, the highest rate of hypertension patients is found in Seychelles and lowest rate in Japan as shown in Figure 3.

The physical properties, taxonomical data, and pharmacokinetic parameters of efonidipine are shown in Tables 2 to 4, respectively. 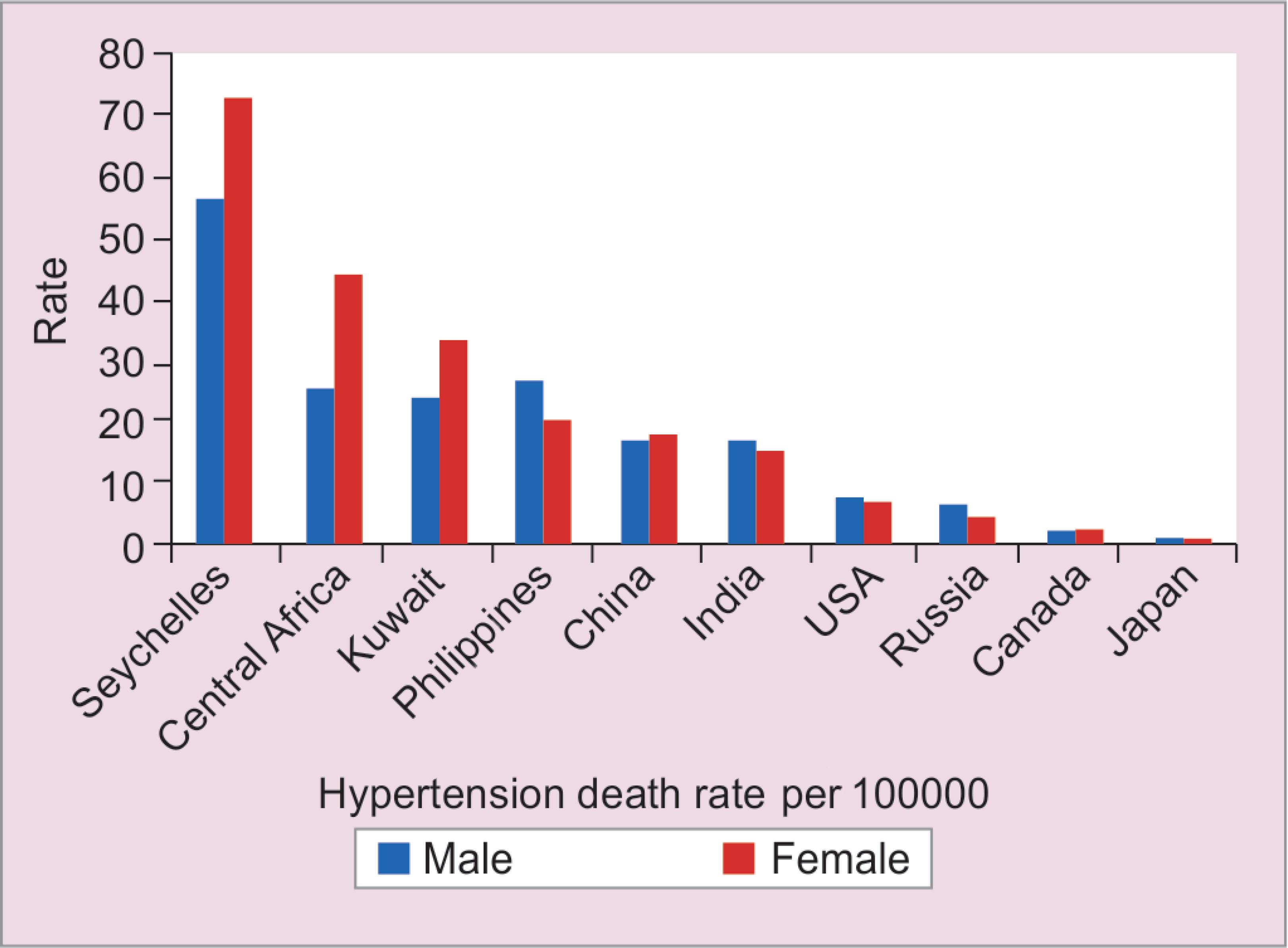 Fig. 3: Hypertension death rate all over the world5

In all agreement, administration of efonidipine decreased the heart rate in patients with a high heart rate, reduced sympathetic nervous activity, and increase parasympathetic nervous activity. In addition, myocardial scintigraphy with 123I-metaiodobenzylguanidine showed significant improvement in the washout rate and H/M ratio of patients who were switched from other dihydropyridine calcium antagonists to efonidipine hydrochloride.

The various analytical methods were developed on efonidipine which are shown in (Figure 4).

Wang et al. have reported spectroscopic studies on the interaction of efonidipine with bovine serum albumin (BSA). The binding of efonidipine to BSA was examined by fluorescence spectroscopy and circular dichroism. The thermodynamic parameters ∆H0 and ∆S0 were 68.04 kJ/mol and 319.42 J mol−1 K−1, respectively, which shows the hydrophobic interactions played a key role. The fluorescence spectra of BSA with different concentrations of NZ-105 were obtained from 300 to 400 nm when Δλ = 60 nm and from 280 to 350 nm when Δλ = 15 nm. The excitation and emission slit widths were 3 and 1.5 nm, respectively. The circular dichroism spectra of BSA in presence and absence of NZ-105 were recorded from 200 to 280 nm at 0.2 nm intervals. The effect of metal ions on the binding constant of the efonidipine–BSA complex were also examined. The presence of metal ions Zn2+, Mg2+, Al3+, K+, and Ca2+ increased the binding constant of efonidipine–BSA complex, which may increase the storage period of NZ-1 105 in blood plasma and enhance its maximum effects.19

Kumar et al. specifies a validated reverse phase high-performance liquid chromatography methodology for estimation of efonidipine HCL Ethanolate (EFD). The separation was carried out by using 250 × 4.6 mm C18 column. The mixture of acetonitrile and water (85:15 v/v) was used as mobile phase and that was set at a flow rate of 0.8 mL/min. The analysis was carried out at 254 nm using UV-Visible detector. EFD manifested a linear response in a concentration range of 20 to 140 μg/mL (R2 = 0.9994). The limit of detection was 681.83 ng/mL and the limit of quantification was 2.06 μg/mL observed. The accuracy was 104.0 to 105.0%, and the coefficient of variation for intra-assay and inter-assay precision was less than or equal to 1.5%.20 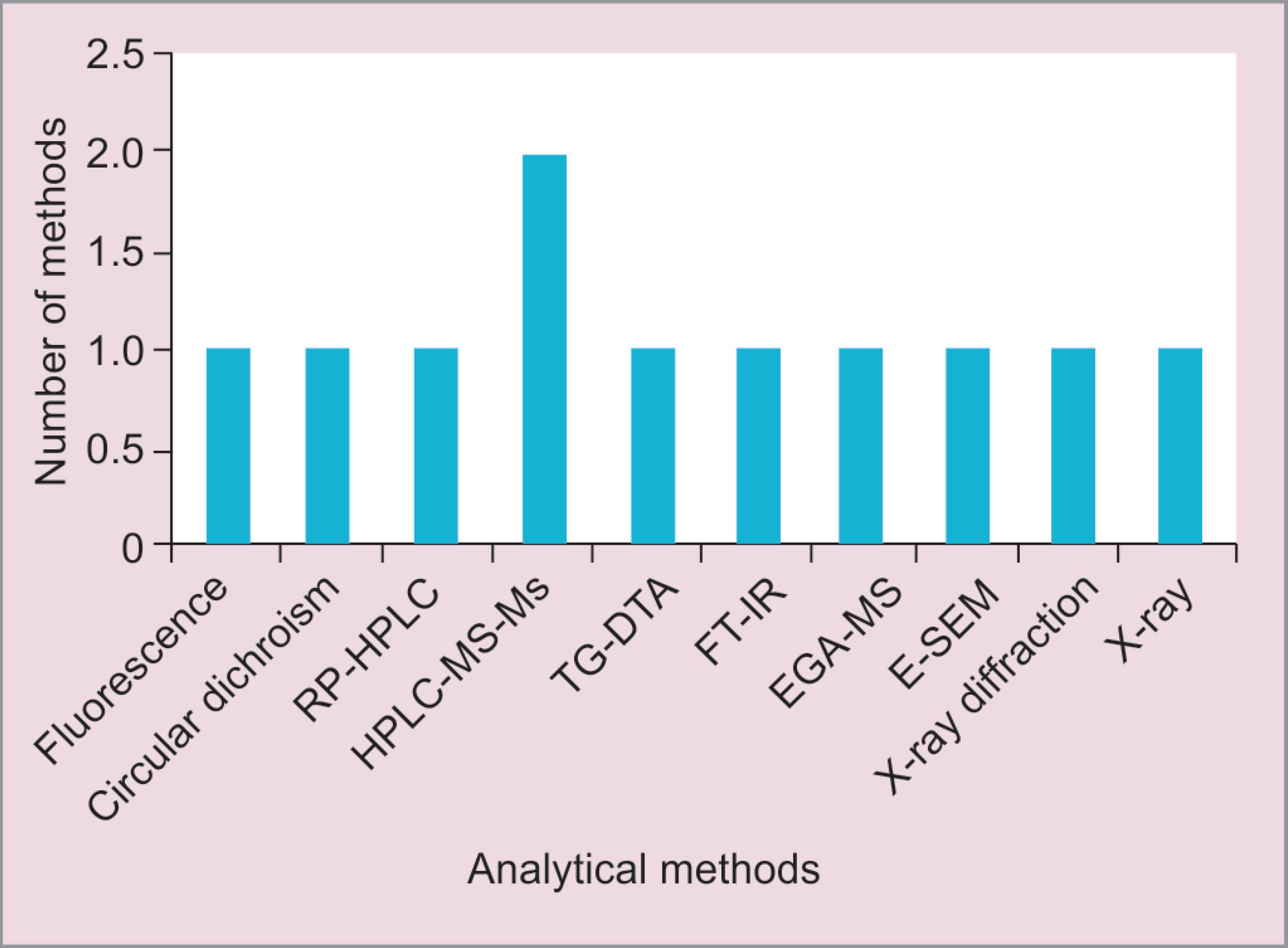 Liu et al. describe a chiral LC-MS/MS method for the stereospecific estimation of efonidipine in human plasma. Chiral separation was done using CHIRALPAK(®) ID column. The mixture of acetonitrile and water (60:40 v/v) was used as mobile phase. Investigation was carried out using MS in multiple reaction monitoring (MRM) mode, using the transitions of m/z 632.3 → 91.1 for efonidipine enantiomers, and m/z 493.3 → 117.2 for cilnidipine (internal standard). The calibration curves were linear over 0.100 to 20.0 ng/mL range. The lower limit of quantification (LOQ) for each enantiomer was established at 0.100 ng/mL. Intra- and interday precisions were less than 12.1%, and accuracies were between −5.0% and 5.0%.21

Liu et al. describe a LC-MS/MS method for the investigation of efonidipine in human plasma for pharmacokinetic applications. The calibration curve was linear between the range of 0.100 and 20.0 ng/mL (R2 = 0.9980). The separation was achieved by LC and analysis was detected by MS/MS in a positive-mode ESI. The LLOQ was established at 0.100 ng/mL. Intra- and interday precisions (LLOQ, low-QC, mid-QC, high-QC and ultra-high QC) were less than 12.5%, and accuracies were between −5.0% and 5.0%.22

The review of literature survey reveals that various analytical methods are available for the estimation of efonidipine. However, there is no report based on scientific approach using design of experiment and no method available for estimation by using HPTLC which may give better experimental parameters. There is no formulation available for efonidipine in combination with other drug (Table 5), but recently Ajanta Pharma applied for combination of efonidipine and telmisartan to treat hypertension. These chromatographic methods are rapid and far more economical. The presented information is useful for the researchers.

We would like to thank the management and the staff of Pioneer Pharmacy Degree College for encouraging and supporting us to publish this article. We are also grateful to the Gujarat Technological University.