An interrelationship between orthodontist and the periodontist is necessary under various conditions. One of the most important aspects in which both parties must come upon agreement for the need of corticotomy is case selection. During orthodontic treatment, several types of malocclusion can be treated by altering the balance between apposition and resorption through selectively injuring the cortical plate of the alveolus which accelerates tooth movement, thereby reducing the risk of extraction and providing long-term stability support; such type of treatment plan is referred to as periodontally accelerated osteogenic orthodontics. This procedure involves selective alveolar decortications, placement of bone grafting material, along with application of orthodontic force. There are different types of corticotomy procedures such as circumscribed, triangular, and indentation, where each technique differs from each other based on their indication, contraindication, and limitations. Placement of bioabsorbable grafting material over the decortications site should be carried out at utmost care and followed by suturing the flap to a final position. After 1 or 2 weeks, orthodontic tooth movement begins.

Another important aspect in terms of tooth movement during orthodontic treatment, it differs from adults and children.3 This is due to the growth of maxilla, mandible, collagen fibers maturation rate, periodontal hyalinization, and alveolar flexibility, which differs among children and adults.3 As age increases, periodontal complications for adult’s also increase due to cell mobilization, slower rate of conversion of collagen fibers, and rigidity nature of alveolar bone.3 Hence, orthodontic treatment makes it more time-consuming and challenging for adults.

A new innovative technique was introduced by Wilcko et al., which involves a combination of surgical corticotomy procedure along with placement of grafting material, referred to as accelerated osteogenic orthodontics (AOO) and more recently to as periodontally accelerated osteogenic orthodontics (PAOO).6 This technique has offered solutions to many severe malocclusion cases such as reduced treatment time, accelerate in tooth movement, long-term support of periodontium. A change in bone metabolism occurs due to the intentional injury performed on cortical bone leading to a transient state of osteopenia, described as rapid acceleratory phenomenon (RAP).5

Initially, use of hand-pieces and surgical burs were carried out for corticotomy procedure, but these devices cause more risk of damage to supporting structures.4,7,8 To reduce the risk of damage, other devices such as laser,9 perforator,10–12 and piezoelectric apparatus were used.13–16

There are different terms used for the corticotomy procedures such as AOO technique,6,17–20 selective alveolar decortication (SAD),4 PAOO,6,17–20 corticotomy-facilitated orthodontics (CFO) known as speedy orthodontics.4 These techniques differ from each other only due to the addition of bone grafting along with corticotomy.21

In this case report, a patient complaint of forwardly placed upper and lower front teeth and was diagnosed with Angles class I malocclusion with proclination. In this corticotomy procedure, indentation technique was used which reduce the risk of root injury, and also can be used for thinner cortical bone.22

A 29‐year‐old male patient came to Department of Periodontics, AB Shetty Dental College, Mangaluru had a complaint of forwardly placed upper and lower front teeth. The case was diagnosed as Angles class I malocclusion with proclination. Treatment plan was discussed with orthodontist, later explained to the patient, and decision was made. Informed consent was taken from the patient after describing surgical procedure to the patient. No relevant medical history reported.

Phase I periodontal therapy which includes scaling and root planning, oral hygiene instructions, plaque control measures were provided for the patient prior to surgical and orthodontic treatment. Reevaluation of phase I therapy was monitored monthly during the treatment period.

Initially, local anesthesia was given prior to surgical procedure (Fig. 1). An incision extending from gingival margin toward level apical to the apices of mandibular anterior teeth was given vertically, followed by buccal intracrevicular incisions connecting these initial vertical incisions. With the periosteal elevator, the flaps were raised beyond the level of the apices of the teeth (Fig. 2).  An indentation corticotomy was planned for mandibular anterior teeth. Using a round fissure bur mounted on a micromotor hand piece, indentations in the form of vertical buccal grooves were made through the cortical layer of the exposed bone, starting 1.5 mm below the interdental crest. Decorticated sites were covered with bioabsorbable grafting material (Figs 3 and 4). An in-depth saline irrigation was done at the surgical sites prior to flap repositioning and sutured. Patient was given antibiotics and analgesics for 1 week. Suture removal was done after 3 weeks (Fig. 5). Follow-up was done after 3 months (Fig. 6). Presently patient is undergoing orthodontic treatment. 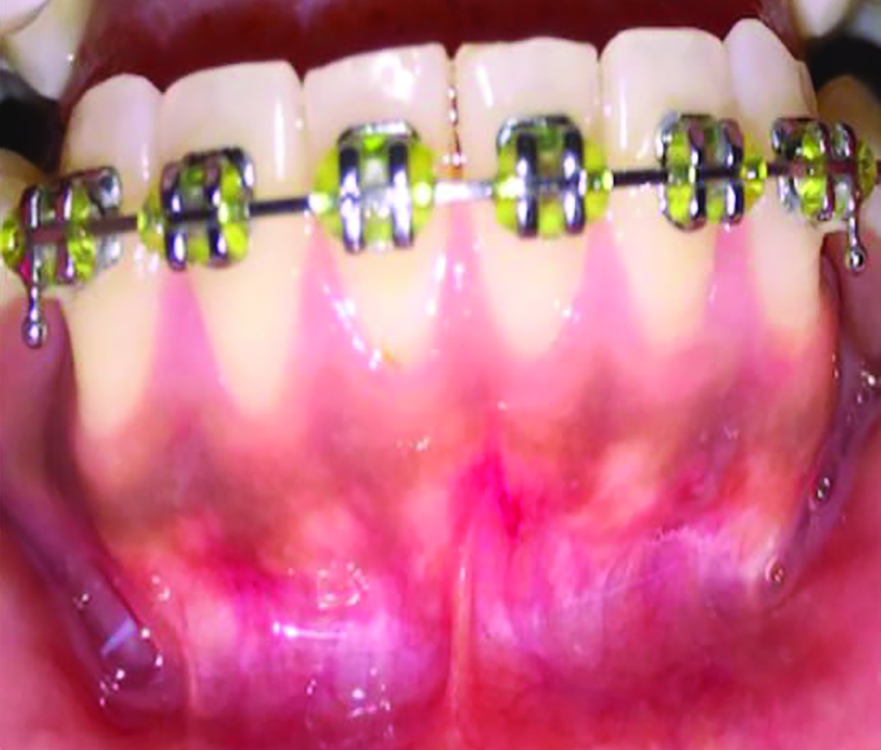 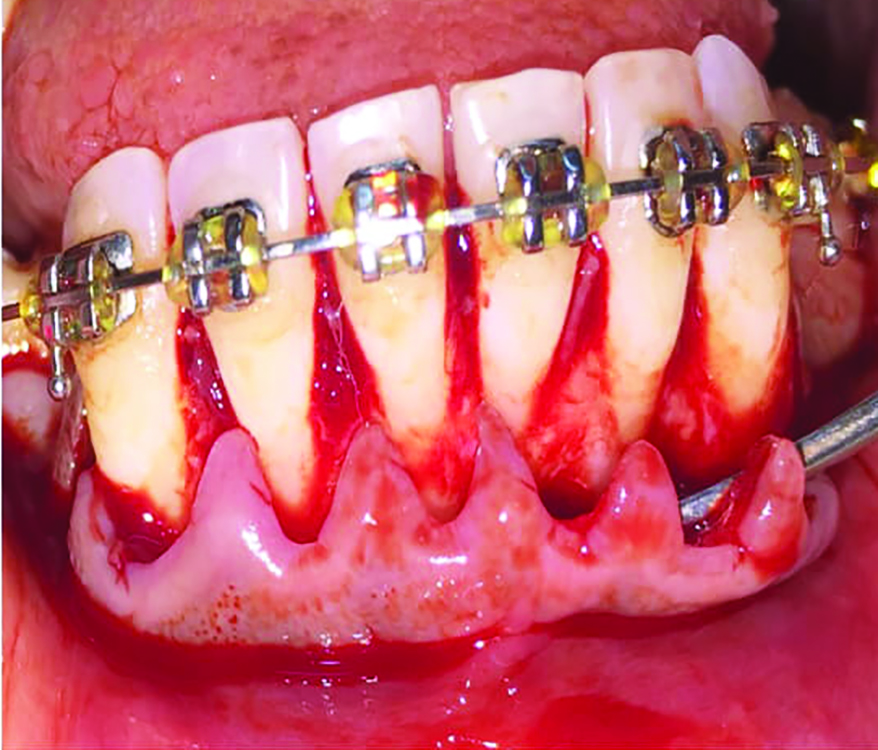 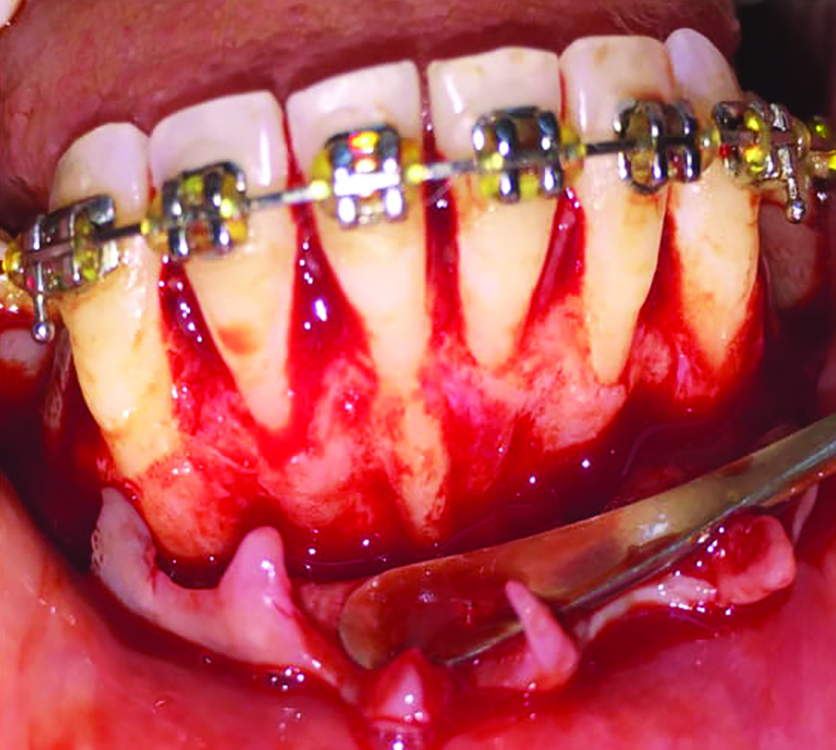 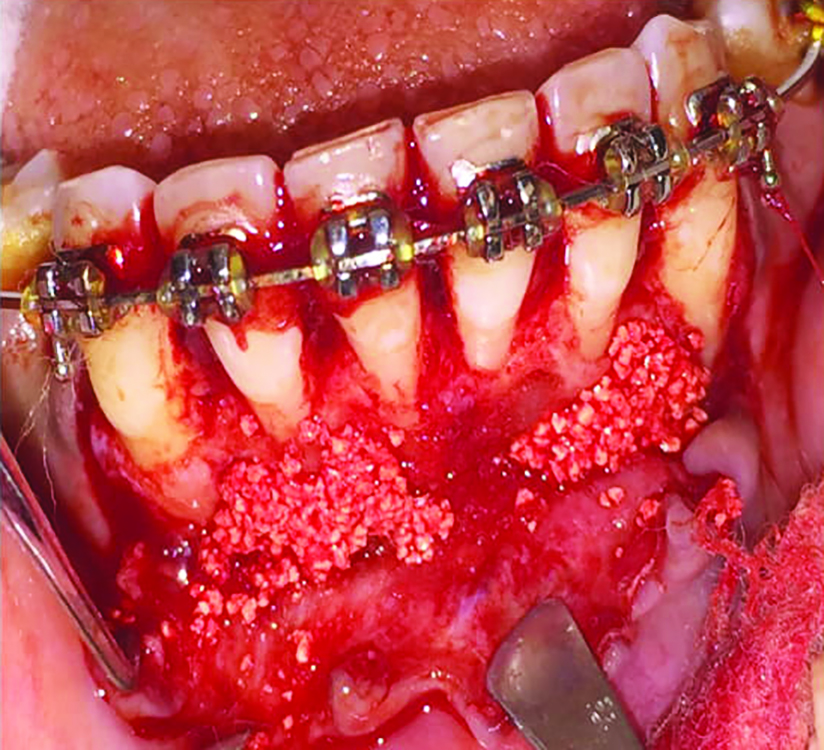 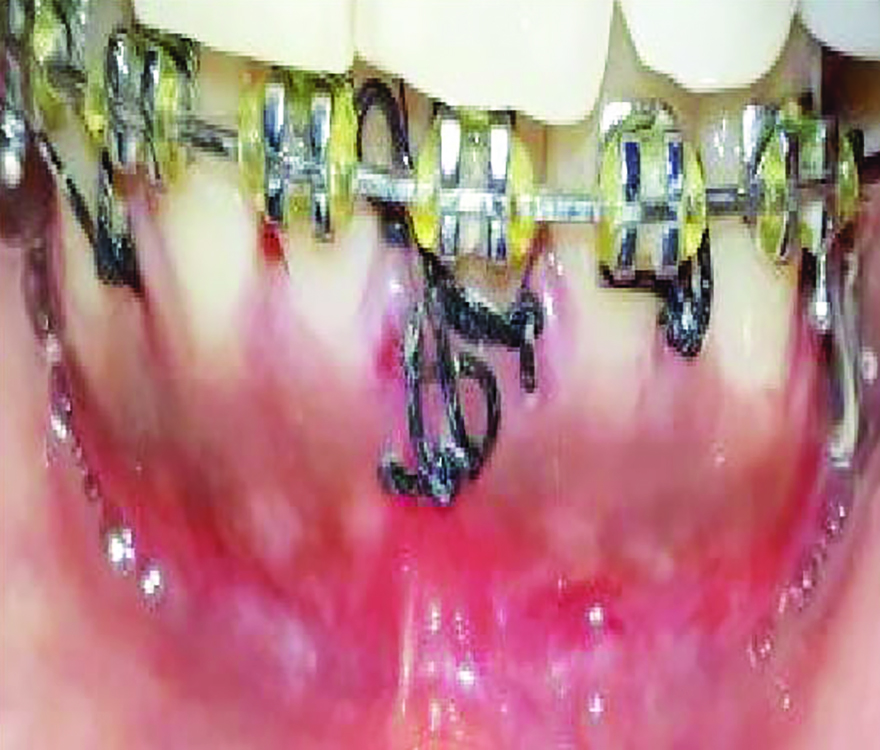 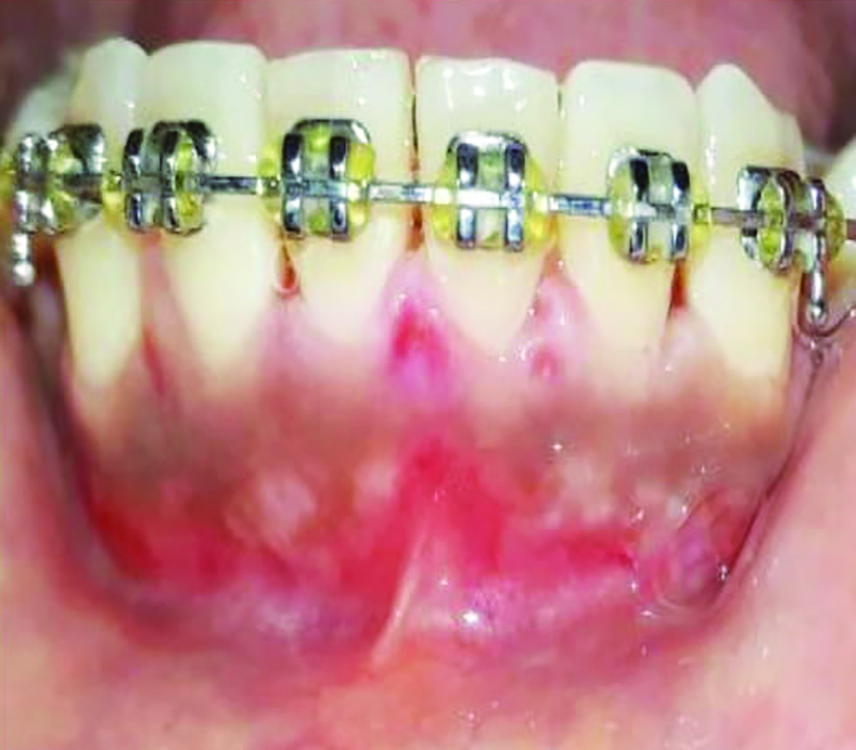 This case report concluded that the technique used has been shown how corticotomy along with bone graft facilitates tooth movement during clinical perio-ortho-treatment in adult patients, which helps to reduces treatment time, long-term posttreatment stability, less root resorption and gingival recession, both metal and ceramic brackets can be used.5

This procedure should be avoided in any patients having any form of periodontal pathology or deformity that compromises the periodontal health, less attached gingiva, patients on long-term steroid therapy, or any other medications that slow down bone metabolism such as NSAIDs. All the risks and possible after-effects should be explained to the patient prior to the initiation of the treatment.4

Mucogingival surgeries such as intrabony periodontal defects and guided bone regeneration require additional bone grafting material to fill in the defect which would help in the formation of new cells to repair the periodontal damage. There are different types of bone grafting materials, which can be either osteoinductive or osteoconductive or both. Autogenous bone graft in particulate form has been considered as one of the most successful graft materials for filling, sinus augmentation, and other surgeries. However, another limitation of this procedure is difficulty to reduce the risk of leakage and displacement particulate bones substitutes. Additionally, the soft tissue tension caused by these flaps sutured to its final position to adapt bone graft material over the coronal alveolar crest would lead to vertical alveolar bone loss.

This report concludes that the procedure is an invasive procedure and limits duration of treatment, thereby facilitating tooth movement at faster rate, which overcomes other limitations such as duration of treatment and reducing the adverse effects on teeth. Although, this procedure provides adequate results, a pouch design would be appropriate for filling bone-grafting material. Future research is required to overcome these drawbacks and provide better results.

Authors would like to thank the patients for their support and cooperation throughout the treatment and follow-up period.