Aims and objectives: This article describes rehabilitation of mandibular partially edentulous arch in a patient who was dissatisfied with her previous partial denture. This case report discusses prosthetic rehabilitation after post and core of three mandibular teeth with minimal coronal structure and then using computer-aided design/computer-aided manufacturing (CAD/CAD) for the fabrication of the porcelain fused to metal (PFM) crowns and the cast partial denture framework.

Background: In recent generation, the demand and awareness for quality treatment has been rapidly increasing. While treating a patient who is partially edentulous, principal attention is aesthetics, function and retention of the prostheses. Although attachments have a long history, many of the dental clinicians are hesitant to use these attachments in their day to day practice. The advantage of using these attachment-retained cast partial dentures is it improves aesthetics, provides comfort and function of the denture and at the same time fulfils patient’s expectations.

Case description: This case report describes 56-year-old female with the complaint of difficulty in mastication due to multiple missing teeth in the lower arch. It describes the clinical and the laboratory steps for prosthetic rehabilitation of a patient with mandibular partially edentulism using prefabricated metal posts, core build up, and cast partial denture with Preci-Vertix attachments.

Clinical significance: This case report discusses a rehabilitation option for a patient who was unhappy with her previous prosthesis. The treatment planned here focuses on preserving the tooth present using post and core followed by fabrication of Preci-Vertix attachment prosthesis using CAD/CAM. Moreover, this resulted in prosthesis that was more precise with better retention and patient satisfaction.

In the current generation, the demand of quality treatment is increasing. There is an array of techniques involved in prosthetic rehabilitation of a partially edentulous mouth. Before deciding the treatment plan, the present anatomic relationship of the tissues and state of the remaining tissues must be evaluated. One must also keep in mind the patient’s concerns and the treatment plan must best suit the individual. Retainers and precision attachment components facilitate better retention to cast partial denture.1 According to GPT-9 “an attachment is a mechanical device for the fixation, retention, and stabilization of a prosthesis”.2 Attachment-retained cast partial denture fulfils the functional requirement of the missing teeth, as well as improves the aesthetics and comfort. Various studies done till now have stated a survival rate of 83.35% for 5 years, of 67.3% up to 15 years, and of 50% up to 20 years.3,4

This case report describes a patient with Kennedy’s class III mod 1 condition of mandibular arch and multiple teeth with major coronal structural loss. Cast partial denture retained using extracoronal precision attachment (Vertix) was used to restore it prosthetically. The present case is different from the other cases, as majority of the cases published in literature discuss about distal extension cases. This is because rehabilitation of distal extension case is considered to be more challenging.5 It discusses prosthetic rehabilitation after post and core of three mandibular teeth with minimal coronal structure followed by fabrication of the porcelain fused to metal (PFM) crowns and the cast partial denture framework using computer-aided design/computer-aided manufacturing (CAD/CAD). The patient treated here have had multiple partial dentures in the past but was unsatisfied with it and stopped using them. Reasons for the failure of retention of her old treatment partial dentures might have been the minimal lingual vestibular depth, improper support from abutment teeth, and the incorrect design of her past cast partial denture may have resulted in the breakdown of the abutment tooth structure. Post and core was decided for majority of her primary abutments which had minimal coronal structure left and were periodontally sound.

A 56-year-old female reported to the Department of Prosthodontics and Crown and Bridge with the chief complaint of difficulty in mastication due to multiple missing teeth in the lower arch. She gave history of using multiple partial dentures in the past 5–6 years, but she was not satisfied with the retention of the denture. On intraoral examination, it was noted that she had missing 33, 35, 36, 45, 46, and 47 (Fig. 1). Her 38, 34, and 48 were root canal treated with minimal coronal structure, and 44 was also root canal treated with a PFM crown. Thorough clinical and radiographic examination was done and a prosthetic treatment plan was set up. Metal post and core build up were planned for 38, 34, and 48 as they were periodontally sound and endodontically treated. A cast partial denture retained using extracoronal precision attachment was planned for mandibular arch, PFM crowns for 37, 34, and 44 and metal crowns for 38 and 48 were also planned. The precision attachment was decided to be placed on 34 and 44. 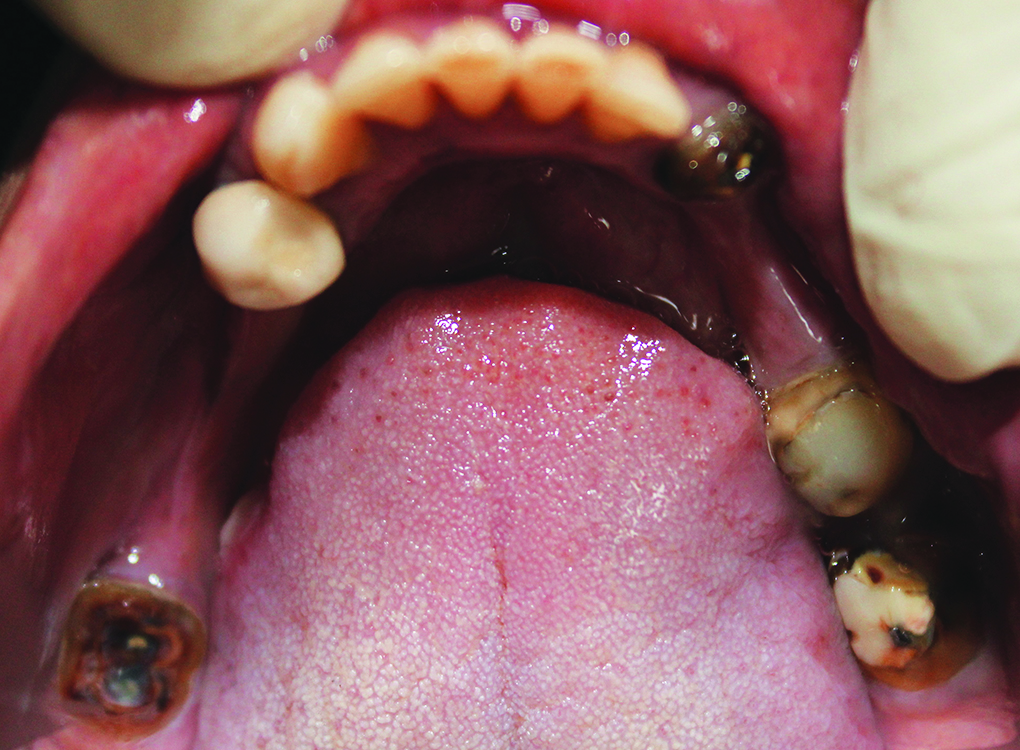 The restorative treatment was started with post and core on 38, 34, and 44. Prefabricated self-threaded metal posts  (Fig. 2) were used, and the core build up was done using Miracle Mix (GC America INC). This was followed by tooth preparation of 38, 37, 34, 44, and 48 for receiving full veneer crowns. The crowns were designed and milled using CAD/CAM. Crowns for 34 and 44 were fabricated with the attachments and the trial of all were done to check the exact fit of the crowns (Fig. 3). Border molding was done using a custom tray fabricated for mandibular arch and pick-up impression was made with medium-bodied elastomeric impression material. Die stone was used to pour the impression, and cast partial denture framework was fabricated using CAD/CAM after scanning of the cast. Crowns with attachments were temporarily cemented with Temp-bond Temporary Dental Cement (KERR DENTAL), and cast partial denture framework was tried in the patient’s mouth. Necessary adjustments were made in the framework after which the wax rims were fabricated, and jaw relation record was established. The casts were mounted on semiadjustable articulator after facebow transfer (Fig. 4). Teeth arrangement was done in order to achieve occlusion, and trial dentures were finished for try-in in patient’s mouth. The cast partial framework was processed with heat-activated acrylic resin (DPI, The Bombay Burmah Trading Corporation, Mumbai, India) after taking patient’s approval for speech and aesthetics. The final prosthesis was finished and polished with the help of acrylic trimming burs and pumice (Fig. 5). 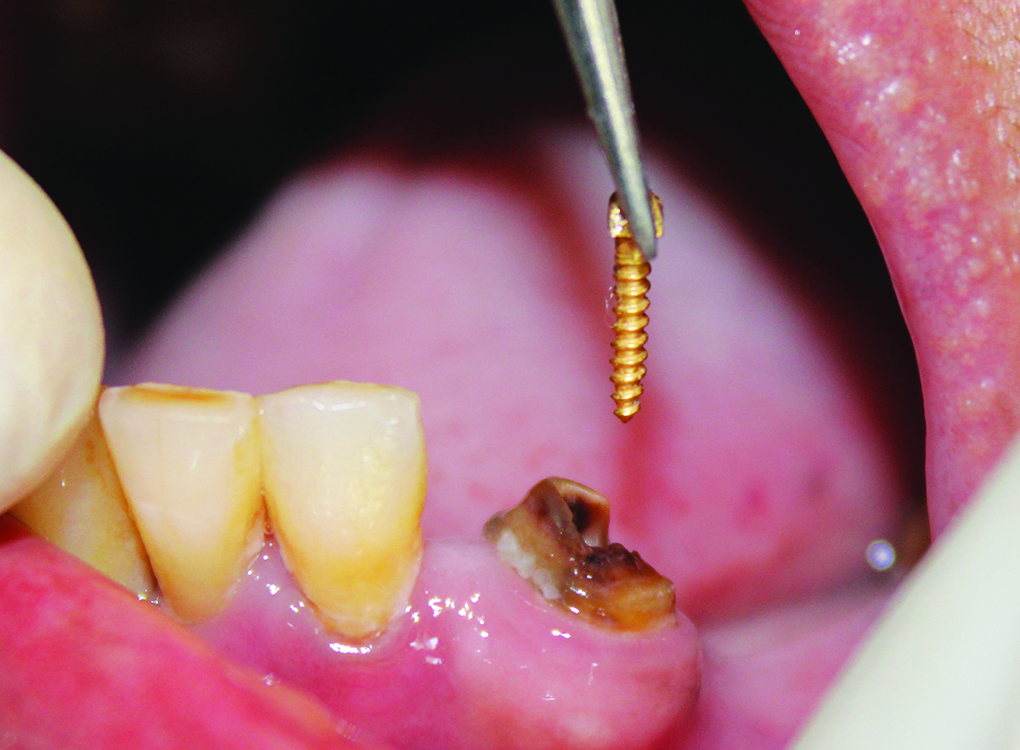 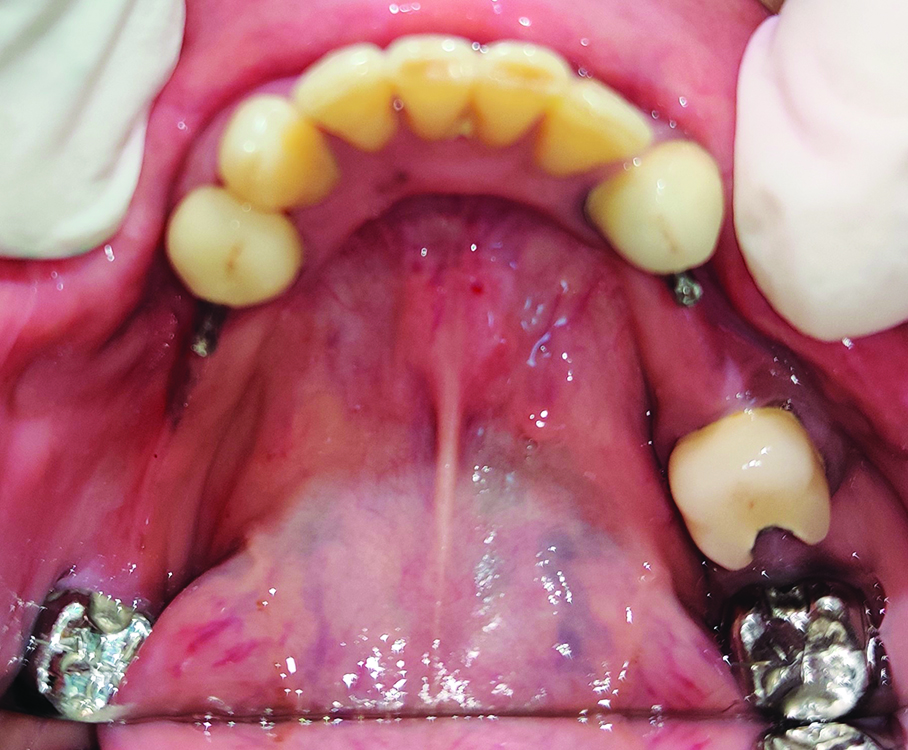 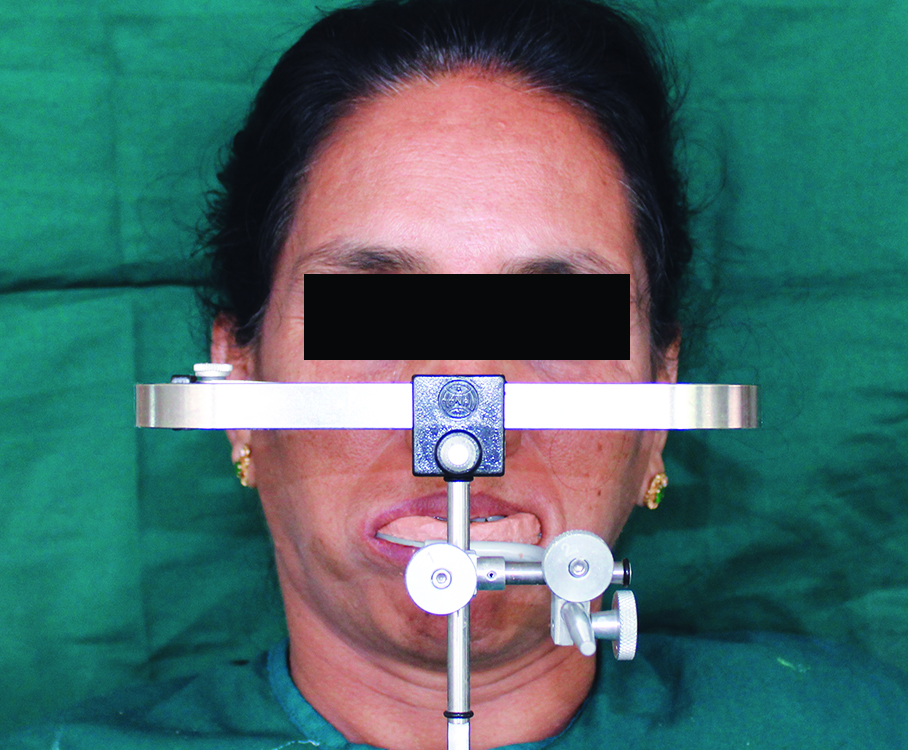 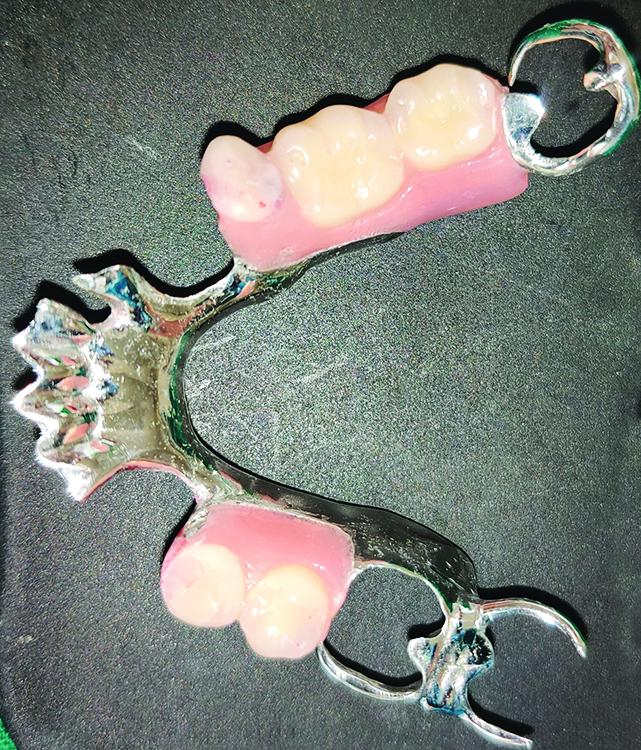 Then, glass ionomer cement (FUJI GC I, Japan) was used to cement the crowns and cast partial denture was inserted in patient’s mouth (Fig. 6), and occlusion was verified. The clinical pick-up of the nylon caps was done using pattern resin (GC America INC). After pick-up, the cast partial denture was taken out of the mouth, and all the excess were removed (Fig. 7). It was reseated again and lateral deflective contacts were checked and corrected using articulating paper. Postinsertion instructions were given, and patient is kept under observation. Regular follow-up was done for next 6 months. Patient was satisfied with the prosthesis both aesthetically and functionally (Fig. 8). 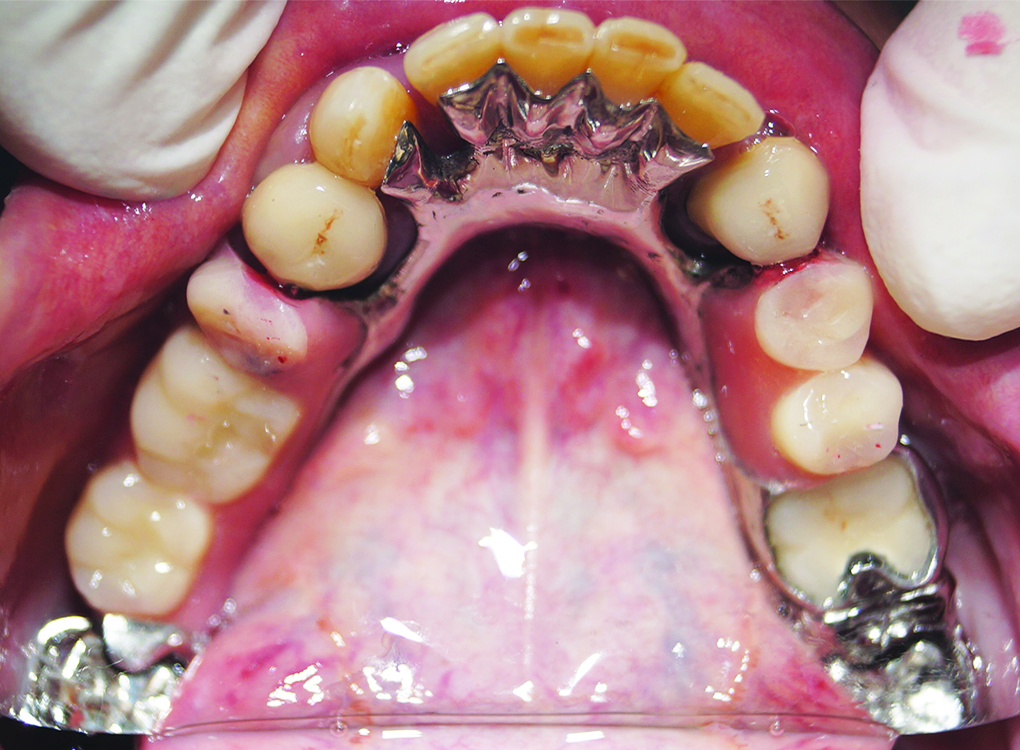 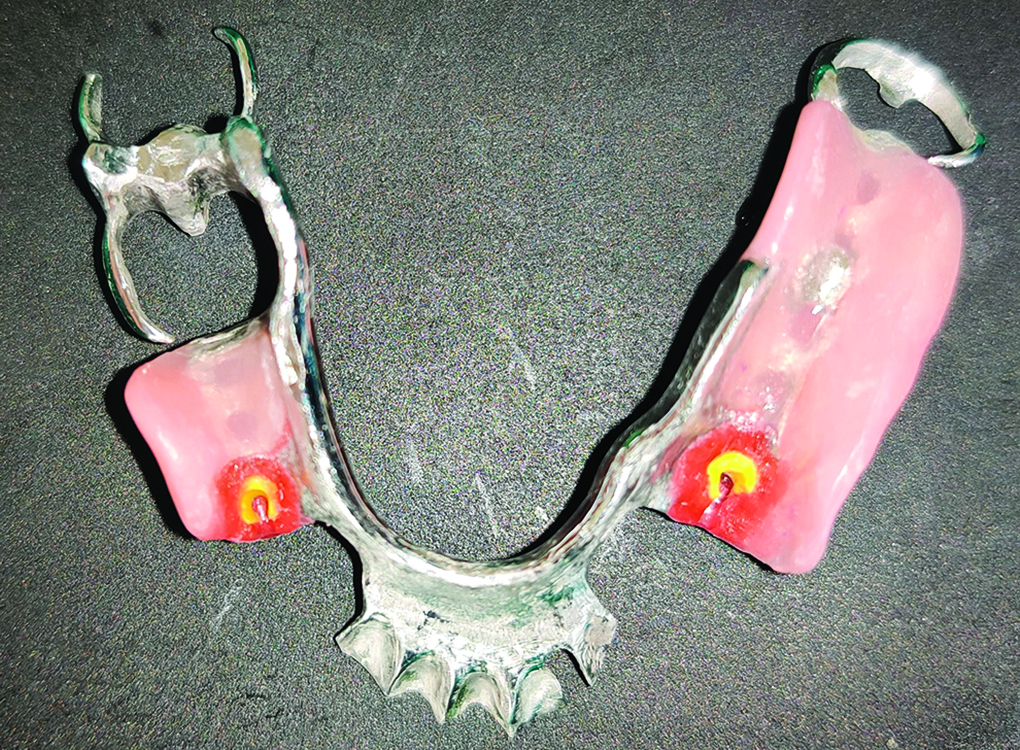 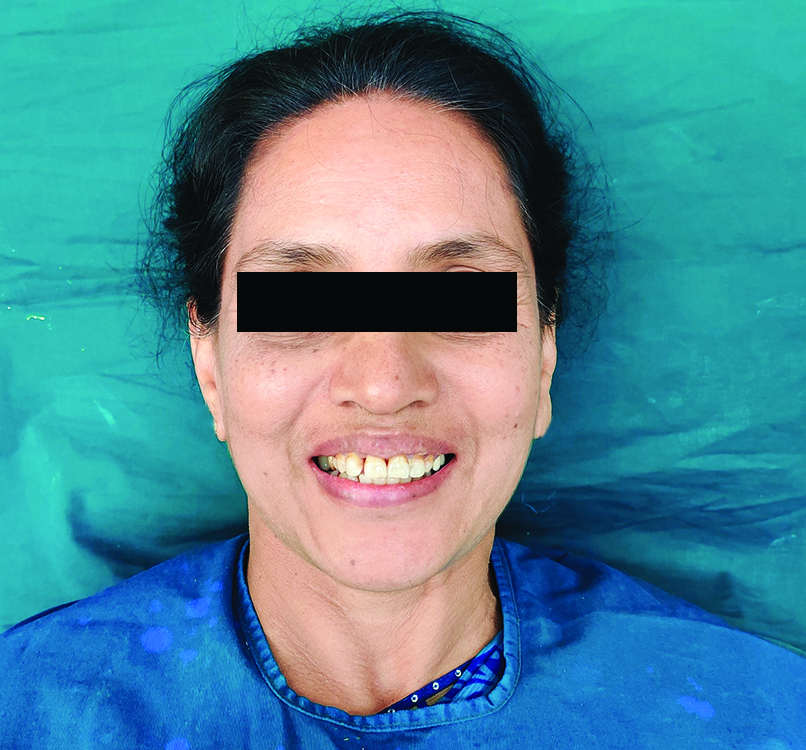 Several treatment options are available for the rehabilitation of  a patient with partial edentulism. The best treatment plan should be selected for the patient based the examination findings and patient’s perspective. Precision attachment is a connector consisting of two or more parts. It provides a mechanical connection, where one part is connected to a root, tooth, or implant and the other part to the prosthesis. These combine the advantage of fixed and removable restorations.6

In recent years, dentistry has witnessed the use of computer-aided design and computer-assisted milling, precision-milled, and semi-precision attachments, improved impression materials, improved techniques and designs which would eventually attain a comprehensive treatment.7

According to Holst et al.,8 it has been cumbersome to evaluate precision attachments’ effect on treatment longevity based solely on in vitro results. Long-term success of precision attachment is affected by some other factors such as continuous ridge resorption, changes in saliva flow and composition, and occlusal considerations. The decision whether an attachment should be used in removable partial denture design should be carefully considered after evaluating the given clinical scenario. Clasp-type removable partial dentures should be used whenever practical because of their lower cost, ease of fabrication and maintenance, and predictability of results.9

The posts used in this case report is prefabricated metallic self-threaded active posts made of gold alloys. Primary retention for these self-threaded posts come directly from root dentin by the use of threads. The major concern about threaded posts has been root fracture. Therefore, one should be careful about its use.10 Core build-up was done using Miracle Mix as it provides high strength and because of fluoride release reduces the risk for secondary caries.11 Altogether, in this case report, the best treatment was provided to the patient using advanced digital dentistry which resulted in the success of the denture.

Procedures involved in fabrication of prostheses with dental attachments and post and core may seem to be expensive, complicated, and time-consuming, but with the knowledge of basic prosthodontics, good clinical skills and correct case selection one can implement the use of this in daily clinical practice. Advancement in digital dentistry has resulted in outcomes that are more precise and favorable. Culmination of basic prosthodontic knowledge and digital advancement can improve the comfort, aesthetic, function, and satisfaction of the patients.

This case report discusses a rehabilitation option for a patient who was unhappy with her previous prosthesis. The treatment planned here focuses on preserving the tooth present using post and core followed by fabrication of Preci-Vertix attachment prosthesis using CAD/CAM. Moreover, this resulted in prosthesis that was more precise with better retention and patient satisfaction.

Authors would like to express our sincere gratitude to Dr Nandeeshwar DB, Professor and Head, Department of Prosthodontics and Crown and Bridge, Bapuji Dental College and Hospital, Davanagere, Karnataka, for giving us the opportunity and providing invaluable guidance throughout. We also extend our gratitude to all the faculty staff for their keen support.