Dentin hypersensitivity (DH) is a significant clinical oral problem, affecting many adults worldwide. It is defined as a brief, sharp, well-localized pain in response to thermal, evaporative, tactile, osmotic, or chemical stimuli, which cannot be referred to any other form of dental defect or pathology.1,2 Dentin hypersensitivity is a symptom complex, rather than disease and a persisting problem, which without proper clinical management can have a significant impact on a sufferer’s quality of life.3,4

Etiological factors relevant to the development of DH include erosive wear close to the gingival margin where the enamel is thinnest, its removal resulting in exposure of the underlying dentin.4 Gingival recession resulting from periodontal disease or toothbrushing trauma has also been considered to be an etiological factor in DH, as this may result in the exposure of the tooth root and associated cementum. Relative to enamel, the cementum is more susceptible to removal through erosive wear, a process that rapidly leads to exposure of the underlying dentin.6,7 Periodontal procedures like scaling and root planing and periodontal surgery are also known to increase sensitivity in a transient manner.8,9

Various mechanisms have been proposed to explain the development of DH. Most accepted of these is the hydrodynamic theory which was first explained by Gysi in 1900 and the experimental evidence for which was provided by Bränström. According to this theory, the movement of dentinal fluid on stimulation with thermal, chemical, evaporative, or electric stimulus is responsible for excitation of the underlying dentinal mechanoreceptor resulting in sensitivity. Occlusion of dentinal tubule by various occluding agents, application of anti-inflammatory agents, as well as root covering by periodontal surgery are treatment approaches to reduce DH.10

A novel DH treatment technology (Pro-Argin), consisting of 8% arginine and calcium carbonate, mimics the natural process of plugging patent dentin tubules. When applied to exposed dentin, the open dentin tubules are sealed with a plug that contains arginine, calcium, phosphate, and carbonate. The essential components of this new technology are arginine, an amino acid which is positively charged at physiological pH, i.e., pH 6.5 to 7.5, bicarbonate, a pH buffer, and calcium carbonate, a source of calcium. This technology, called Pro-Argin, has been shown to physically plug and seal exposed dentin tubules and to effectively relieve DH.11,12

Calcium sodium phosphosilicate (Novamin) is one of the latest advances that was developed for use in oral health care, in reducing dentinal hypersensitivity. It physically occludes the dentinal tubules. Novamin is a bioactive glass in the class of highly biocompatible materials that were originally developed as bone regenerative materials. These materials are reactive when exposed to body fluids and deposit hydroxycarbonate apatite, a mineral, i.e., chemically similar to the mineral in enamel and dentin.13,14 When incorporated into a dentifrice, particles are deposited onto the dentin surface to mechanically occlude the dentinal tubules. The physical occlusion of Novamin particles begins when the material is subjected to an aqueous environment; sodium ions in the particles immediately begin to exchange with hydrogen cations. This rapid release of ions allows calcium ions in the particle structure, as well as phosphate ions to be released from the material. This initial series of reactions occurs within seconds of exposure and the release of calcium and phosphorous ions continues as long as the particles are exposed to the aqueous environment.14 A localized and transient increase in pH occurs during the initial exposure of the material due to the release of sodium. The increase in pH helps to precipitate the calcium and phosphate ions from the Novamin particle, along with calcium and phosphorous found in saliva, to form a calcium phosphate layer. As the deposition of calcium and phosphorous complexes continues, this layer crystallizes into hydroxycarbonate apatite, which is chemically and structurally equivalent to the biological apatite. The combination of the residual Novamin particles and the hydroxyapatite layer results in the physical occlusion of dentinal tubules, which will relieve hypersensitivity.15

The present study aims to compare the desensitizing efficacy of two commercially available dentifrices, one containing Novamin technology (calcium sodium phosphosilicate, a bioactive glass) and the other containing Pro-Argin technology (arginine and calcium carbonate) when applied after scaling and root planing.

The study protocol was approved by the ethical committee of The Oxford Dental College and Hospital, Bengaluru. About 40 patients who visited the Department of Periodontics, The Oxford Dental College and Hospital, Bengaluru, after satisfying the inclusion and exclusion criteria were recruited in the study. All the patients were given a detailed verbal and written description of the study, and they signed a written informed consent form prior to commencement of the study. These patients were divided into two groups. About 30 subjects having at least two sensitive teeth after scaling and root planing were randomly divided into two groups each containing 15 patients:

Adjacent teeth were isolated by placement of the examiners gloved fingers over the teeth. Air was delivered from a standardized dental unit air syringe at 38 psi. The air was directed at the exposed surface of hypersensitive tooth for 1 second from a distance of approximately 1 cm.. 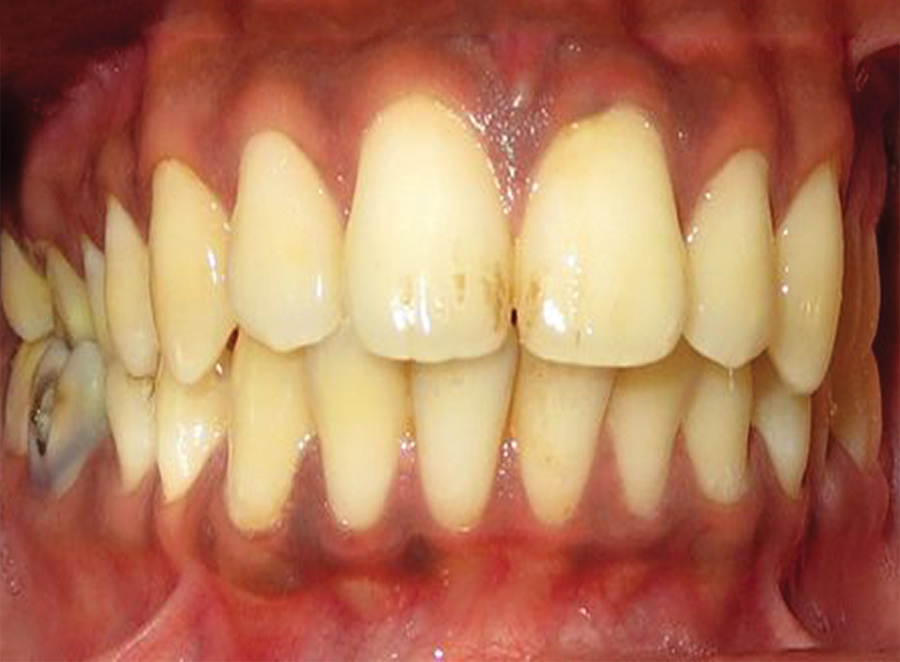 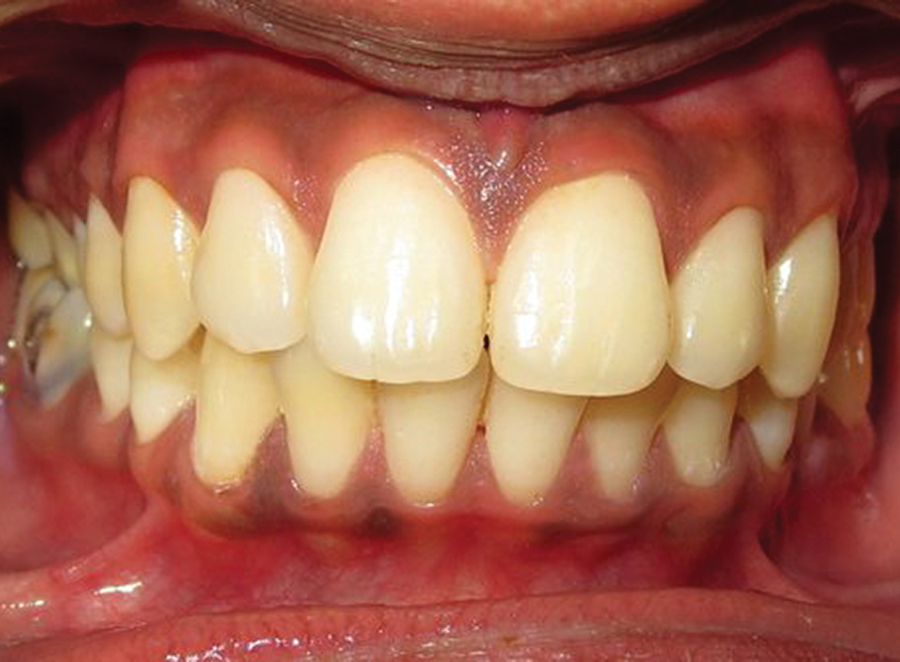 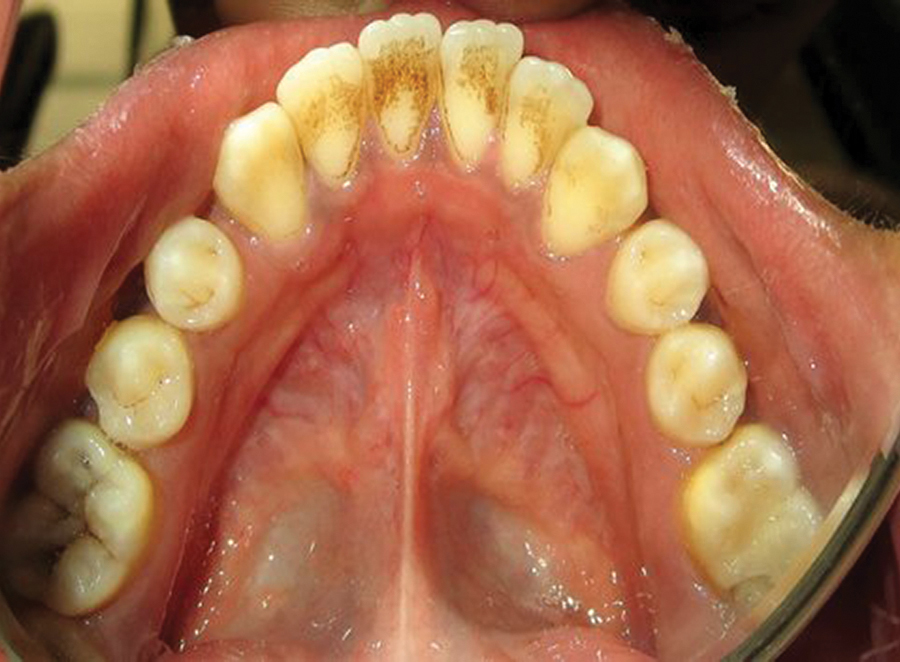 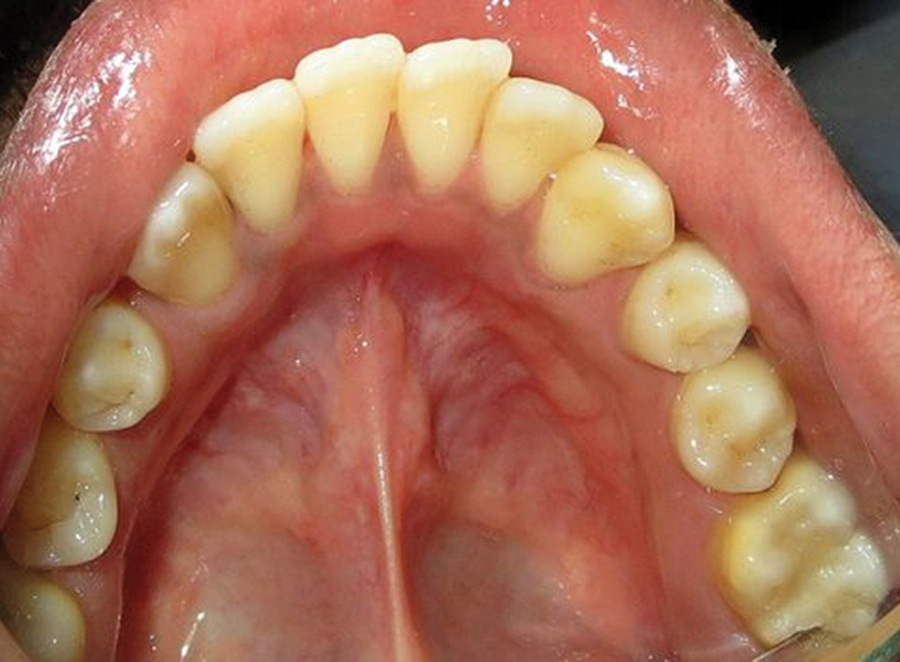 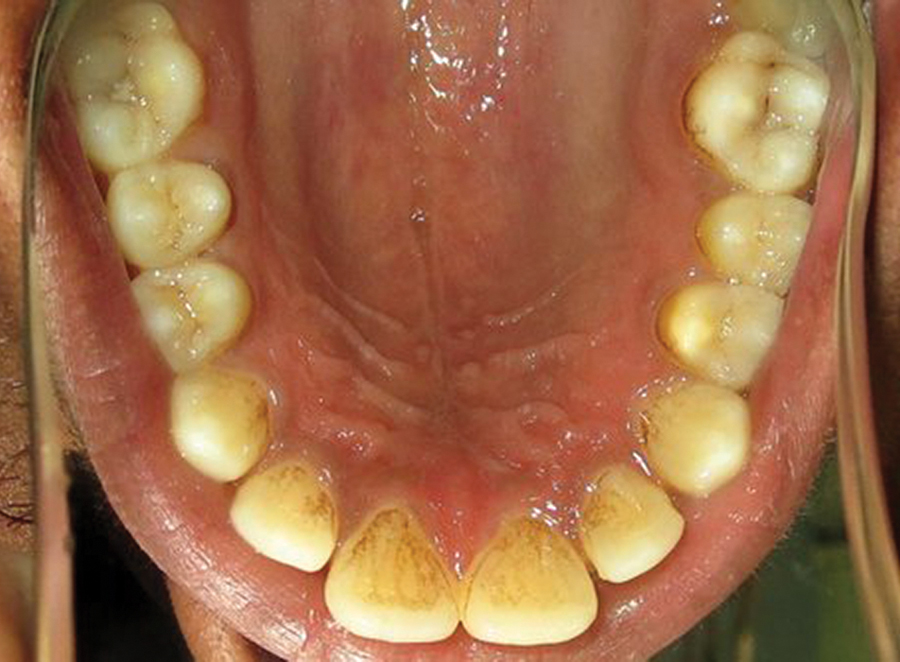 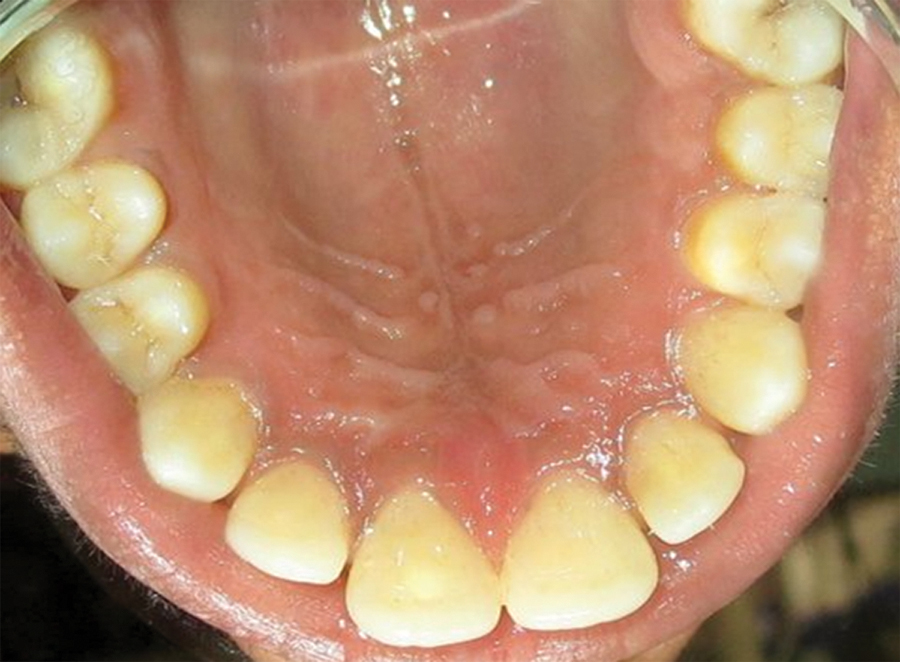 2 = Tooth/subject responds to air stimulus and requests discontinuation or moves from stimulus.

3 = Tooth/subject responds to air stimulus, considers stimulus to be painful, and requests discontinuation of stimulus. 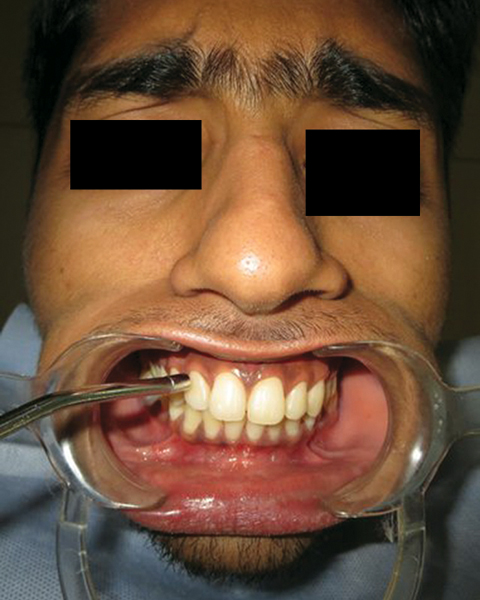 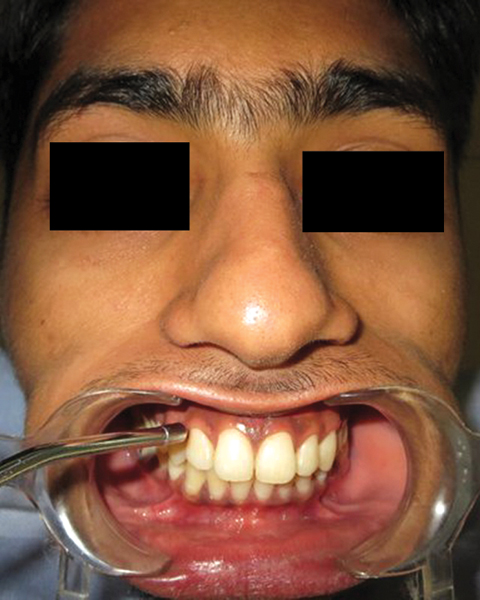 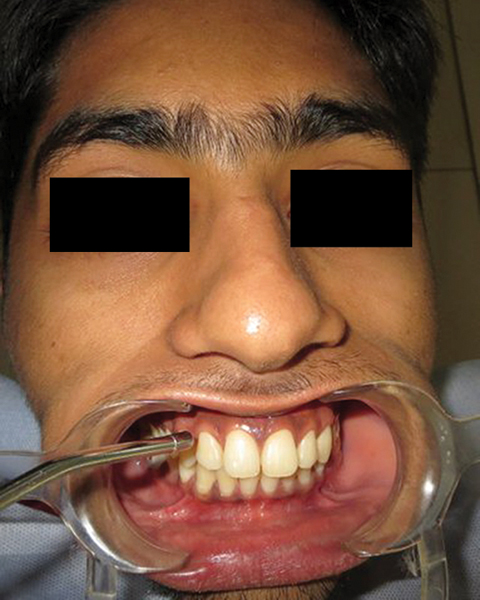 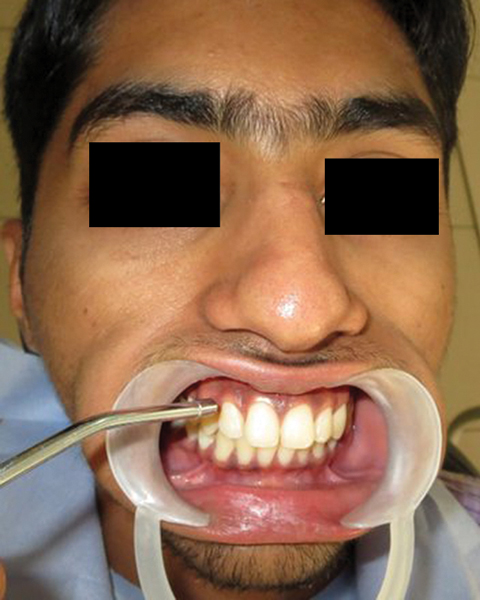 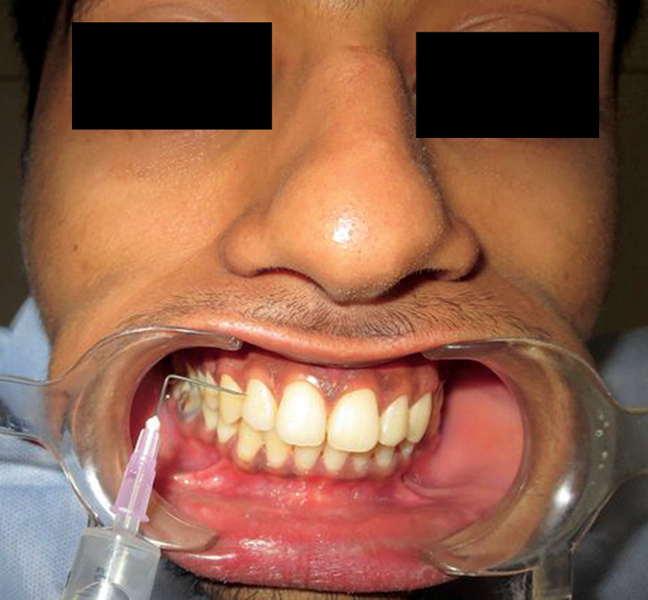 The test was repeated three times before a score using VAS was noted. VAS score of 4 to 10 responses were selected (0—no pain, 10—severe pain).17

Patients were provided with the respective dentifrice. They were instructed to brush for 1 minute in their usual manner, twice daily throughout the period of their study, and asked to refrain from consuming very hot, cold, sweet, or sour food or drinks. Subjects were also directed to refrain from any other dentifrice or mouthrinse during the trial but were allowed to continue their normal oral hygiene practice. Assessment was performed again at 2 and 4 weeks. 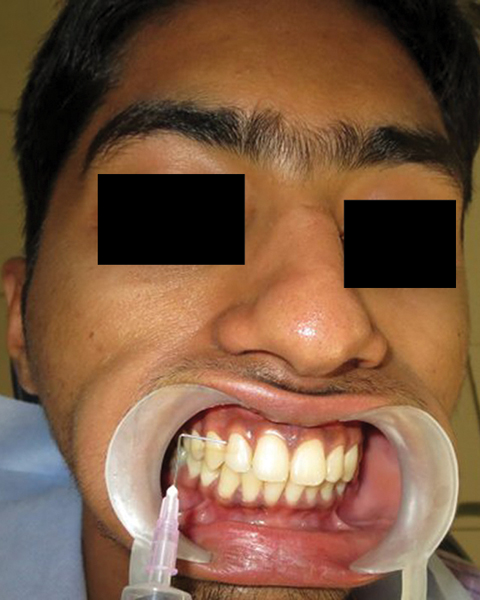 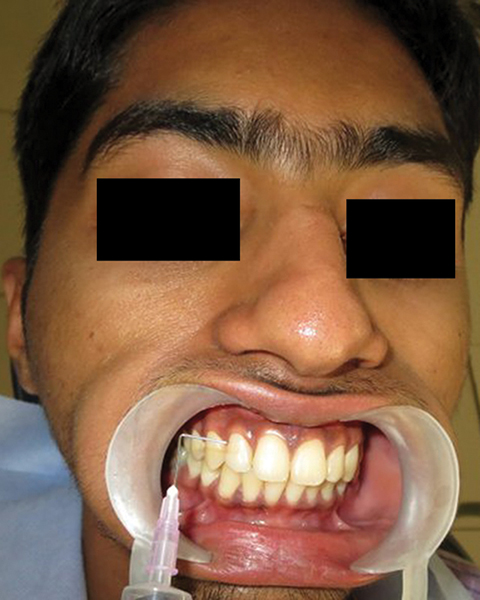 The main focus of the statistical analysis was the difference in change rates (VAS and SCASS) between the two groups. Intergroup comparison was done using Wilcoxon signed rank test.

The purpose of this study was to compare the desensitizing efficacy of two commercially available dentifrices, one containing Novamin technology (calcium sodium phosphosilicate, a bioactive glass) and the other containing Pro-Argin technology (arginine and calcium carbonate) when applied after scaling and root planing.

A total of 30 patients (19 males and 11 females) in the age range of 18 to 60 years were selected on basis of the inclusion and exclusion criteria.

An informed written consent was obtained from each patient after explaining the study design. Patients having at least two sensitive teeth after scaling and root planing were included in this study and randomly divided into two groups each containing 15 patients:

The mean SCASS score for Novamin at baseline and posttreatment was 2.40 and 0.13 respectively. The mean difference between the two groups was statistically highly significant (p < 0.001) (Table 1 and Graph 1).

The mean SCASS score for Pro-Argin at baseline and posttreatment was 2.33 and 0.07 respectively. The mean difference between the two groups was statistically highly significant (p < 0.001) (Table 2 and Graph 1).

Table 1: Statistical analysis for SCASS and VAS scores of Novamin at baseline and 1 week posttreatment

Table 2: Statistical analysis for SCASS and VAS scores of Pro-Argin at baseline and 1 week posttreatment

Table 3: Statistical analysis for SCASS between Novamin and Pro-Argin at baseline and 1 week posttreatment

Table 4: Statistical analysis for VAS between Novamin and Pro-Argin at baseline and 1 week posttreatment 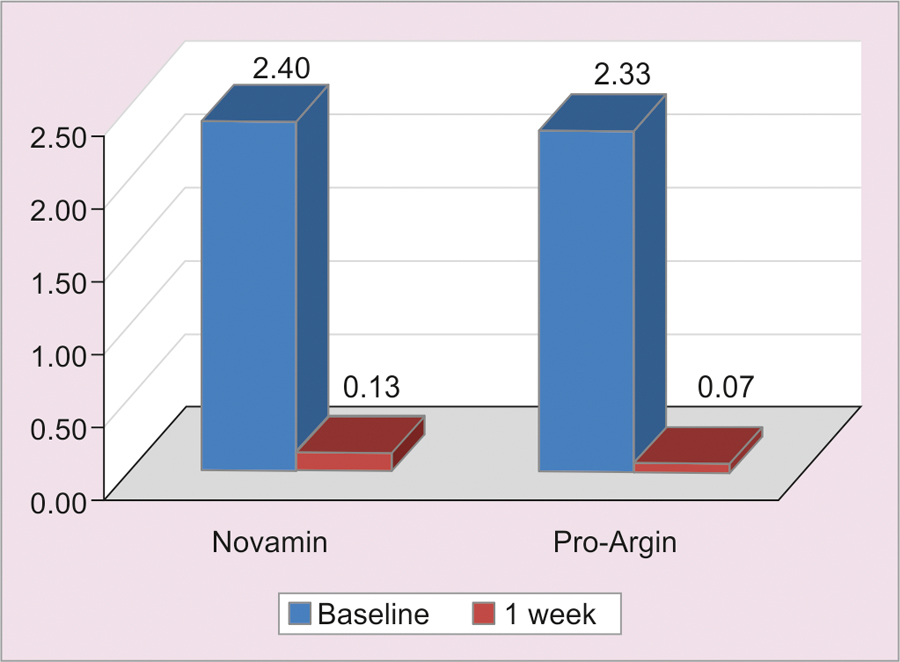 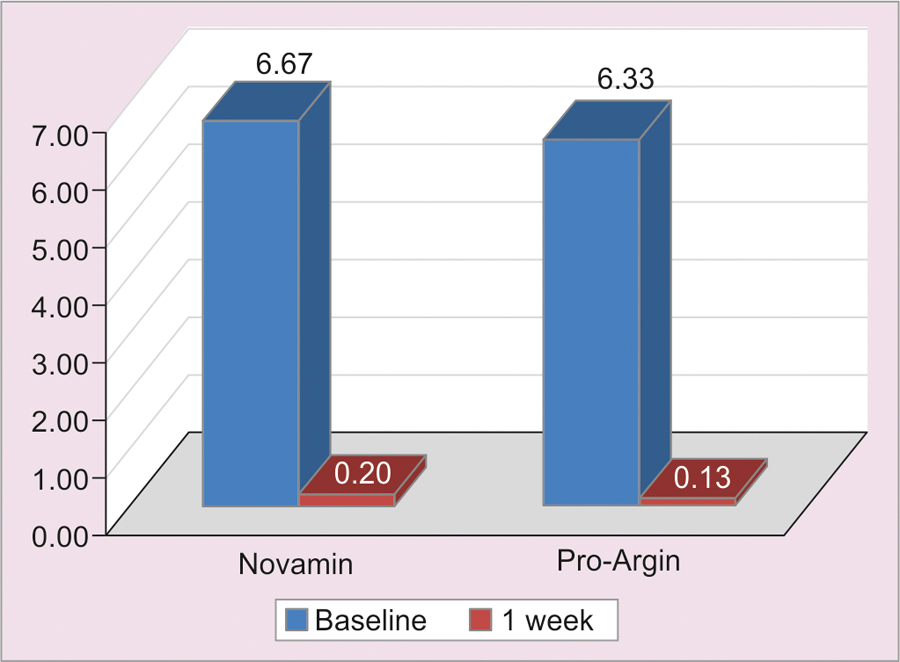 The mean SCASS scores at baseline for Novamin and Pro-Argin were 2.40 and 2.33 respectively. The difference between the two groups was not statistically significant (Table 3 and Graph 1).

The mean SCASS scores for Novamin and Pro-Argin posttreatment were 0.13 and 0.07 respectively. The difference between the two groups was not statistically significant (Table 3 and Graph 1) (p > 0.05).

The difference in mean SCASS score between baseline and posttreatment for Novamin and Pro-Argin was not statistically significant.

The mean VAS score for Novamin at baseline and posttreatment was 6.67 and 0.20 respectively. The mean difference between the two groups was statistically highly significant (p < 0.001) (Table 1 and Graph 2).

The mean VAS score for Pro-Argin at baseline and posttreatment was 6.33 and 0.13 respectively. The mean difference between the two groups was statistically highly significant (p < 0.001) (Table 2 and Graph 2).

The mean VAS scores at baseline for Novamin and Pro-Argin were 6.67 and 6.33 respectively. The difference between the two groups was not statistically significant (Table 4 and Graph 2) (p > 0.05).

The mean VAS scores for Novamin and Pro-Argin posttreatment were 0.20 and 0.13 respectively. The difference between the two groups was not statistically significant (Table 4 and Graph 2) (p > 0.05).

The difference in mean VAS score between baseline and posttreatment for Novamin and Pro-Argin was not statistically significant.

At 2nd and 4th weeks, the scores were constant for both the groups (score – 0).

The DH is a problem that plagues many patients. The periodontal procedures used to remove plaque and associated damaged tissue are known to increase sensitivity in a transient manner. Products and techniques used for treatment of DH are diverse, suggesting uncertainty among dentists about the best way to treat patients, as well as dissatisfaction with outcomes of available treatments. The development of a therapy that can provide both immediate relief following professional application and a lasting desensitizing effect for a significant time period after use would be of great assistance to clinicians in dealing with DH.17,18

The results of the present study demonstrate comparable clinical effectiveness for the two dentifrices with significant reductions in measures of tooth sensitivity, observed across all measures, at all predefined time points, i.e., groups I and II respectively, vs baseline. This is in agreement with the studies by Salian et al,19 Sharma et al,20 West et al,21 and Litkowski and Greenspan.22

Using dentifrice as a delivery vehicle for Novamin and Pro-Argin is likely to be economical and is not technique sensitive. Therefore, it could offer an excellent at-home treatment.

In early studies done by Kleinberg and Sensistat12 in 2002 demonstrated that application of the arginine calcium carbonate in office desensitizing paste to teeth exhibiting sensitivity following dental prophylaxis resulted in instant relief from discomfort and that relief lasted for 28 days after a single application.

Large and clinically relevant improvement from baseline to 1 week was observed for the two treatment groups using air blast method and cold sensitivity test wherein at 2nd and 4th week, no sensitivity was observed among all the 30 patients depicting a score of 0.

This could possibly be due to the fact that both the active agents have been supplied using dentifrice as a delivery vehicle and the excipient (nonactive) agents in the dentifrice may serve to occlude dentinal tubules over time.

Also, this effect could be related to a natural decrease in DH over time, or because of patient perception of a decrease in symptoms by virtue of participation in a clinical trial, or may be due to placebo products actually providing some degree of relief from DH.

The results of the present study may have to be extrapolated with caution given the small sample size and lack of accounting for the placebo effect and the Hawthorne effect. However, longitudinal studies involving larger sample size with longer follow-up period will be required to confirm the effect of these two formulations on a long-term basis.

Therefore, within the limitations of the study, we found no statistically significant difference in the efficacy of the two desensitizing toothpastes.