Dental plaque is considered as the possible causative agent of major dental diseases, such as dental caries and periodontal disease.1 The microorganisms harbor themselves onto the tooth structure in the form of biofilm, thus leading to formation of the dental plaque. World Health Organization (WHO) defined dental plaque as a specific but highly variable structural entity, resulting from sequential colonization of microorganisms on tooth surfaces, restorations, and other parts of the oral cavity, composed of salivary components like mucin, desquamated epithelial cells, debris, and microorganisms, all embedded in extracellular gelatinous matrix.2

In 1965, Loe and et al demonstrated that subjects with healthy gingiva developed clinical signs of gingivitis within two to three weeks of refraining from all oral hygiene practices due to undisturbed accumulation of dental plaque. On resumption of adequate oral hygiene, the gingival tissue inflammation subsided within a week.3

Studies by Lindhe et al4 and Smulow et al5 demonstrated that mechanical removal of supragingival plaque affects the nutrition of subgingival organisms to affect the micro flora composition in shallow (4 mm) and moderate pockets (6 mm). The attraction of microbes to pellicle begins at the delicate gingival margin, particularly on proximal surfaces. All these studies provide the evidence that removal of microbial plaque leads to cessation of gingival inflammation, and cessation of plaque control measure leads to recurrence of inflammation. The removal of plaque also decreased the rate of formation of calculus. Thus eliminating the plaque and calculus is the key to prevent the occurrence of periodontal disease or halting the progression of the disease. Hence, dental plaque being the primary etiological factor in progression of gingivitis and periodontitis, prevention, elimination, and control of dental plaque formation are the important steps in the prevention of gingivitis as well as minimizing the severity of periodontal disease.

The daily disruption of dental plaque, at and above the gingival margin, appears to be critical in countering the potential of the plaque to cause gingival inflammation. Patient needs to maintain plaque at levels compatible with health in order to prevent the breakdown of microbial homeostasis. Individual skills and acquired behavior patterns determine how effective controls can be.6

Tooth brushing is considered a primary mechanical means of removing substantial amount of plaque in order to prevent oral disease, including gingivitis and dental caries, while also maintaining dental esthetics and preventing halitosis. Mechanical plaque removal with a manual tooth brush remains the primary method of maintaining a good oral hygiene for the majority of the population.

The effectiveness of the tooth brush, however, depends on any one individual acquiring the skills and having the personal motivation to use it properly. There is substantial evidence showing that tooth brushing and other mechanical cleansing procedures can reliably control plaque, provided that cleaning is sufficiently thorough and performed at appropriate intervals.

A randomized clinical trial was carried out on subjects who were recruited from the Department of Periodontics, The Oxford Dental College, Bengaluru.

Method of Collection of Data

A total of 80 subjects were randomly selected for the study based on inclusion and exclusion criteria. Subjects were explained in detail about the study procedure, and informed written consent was obtained from the patient before including him or her in the study.

A total of 80 subjects with mild gingivitis were divided into four groups based on training (group 1: Control group, and three experimental groups, namely group 2: Cast, group 3: Audio visual method and group 4: Individual as model). Each group consists of 20 subjects. These groups, other than the control groups, were further divided into two subgroups, namely reinforcer and nonreinforcer; each subgroup with 10 subjects. The modified bass brushing technique was demonstrated.

The plaque scores before the training session for all the four groups were measured. Then the subjects in the three experimental groups were trained in their respective methods for brushing. For the subjects in the reinforcement groups of the experimental groups, the training was repeated after three days. The plaque scores for all 80 subjects were measured after a period of 1 week. Plaque scores were measured using Turesky–Gilmore–Glickman modification of Quigley–Hein plaque index. Plaque was assessed on the labial, buccal, and lingual surfaces of all the teeth after using a disclosing agent. The scores given were: 0: No plaque; 1: Separate flecks of plaque at the cervical margin of the tooth; 2: A thin continuous band of plaque (up to 1 mm) at the cervical margin; 3: A band of plaque wider than 1 mm but covering less than one-third of crown of the tooth; 4: Plaque covering at least one-third but less than two-thirds of the crown; 5: Plaque covering two-thirds or more of the crown. All the groups received a round of ultrasonic scaling after the initial plaque scores were assessed followed by instructions on the correct brushing technique for the experimental groups. The brushing technique taught was modified bass technique. A questionnaire was also asked to assess the attitude toward the tooth brushing instructions during the follow-up period, as follows:

The data analysis was carried out using Statistical Package for the Social Sciences (SPSS) 20.0. Two-way analysis of variance (ANOVA) with repeated measure was administered to test the efficacy of the training methods, and reinforcement in reducing the plaque scores.

Table 1 gives the plaque scores of the subjects before and after training.

Table 1 reveals that there is a dip in the plaque scores for all the three training methods, but it is more for individual instruction on cast. Also, it can be seen that the percentage dip is minimum for the control group.

Table 1: Plaque scores before and after different training methods

Table 2: Comparison of plaque scores between reinforcers and nonreinforcers at baseline and after training (including control group) 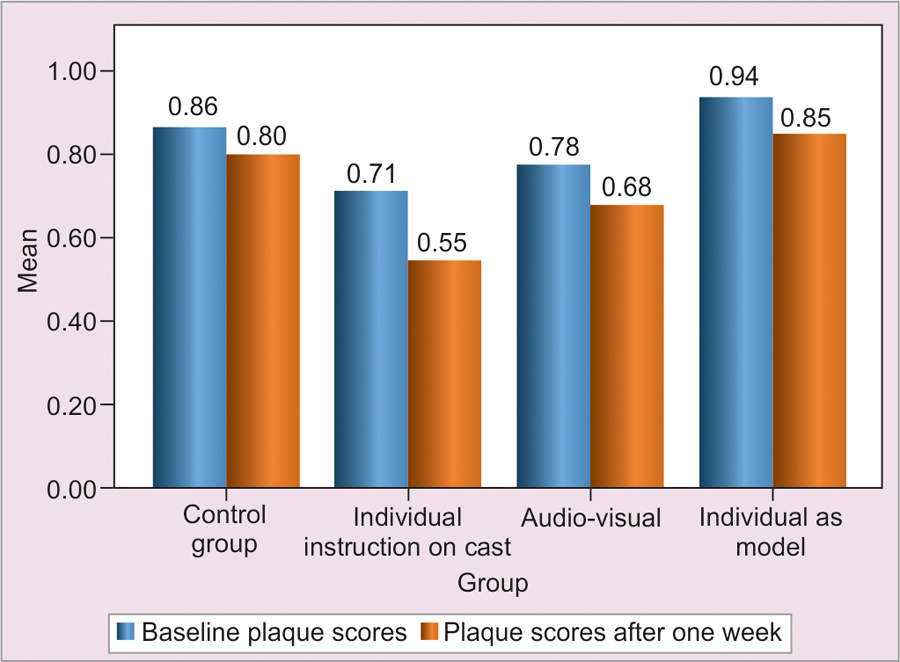 Graph 1 shows the multiple bar chart depicting the averages of plaque scores before and after training for various training methods.

Table 2 shows that the percentage of dip for nonreinforcers is more compared with that of reinforcers.

Graph 2 shows the multiple bar chart depicting the averages of plaque scores before and after training for the two groups.

The hypotheses tested in this study are: 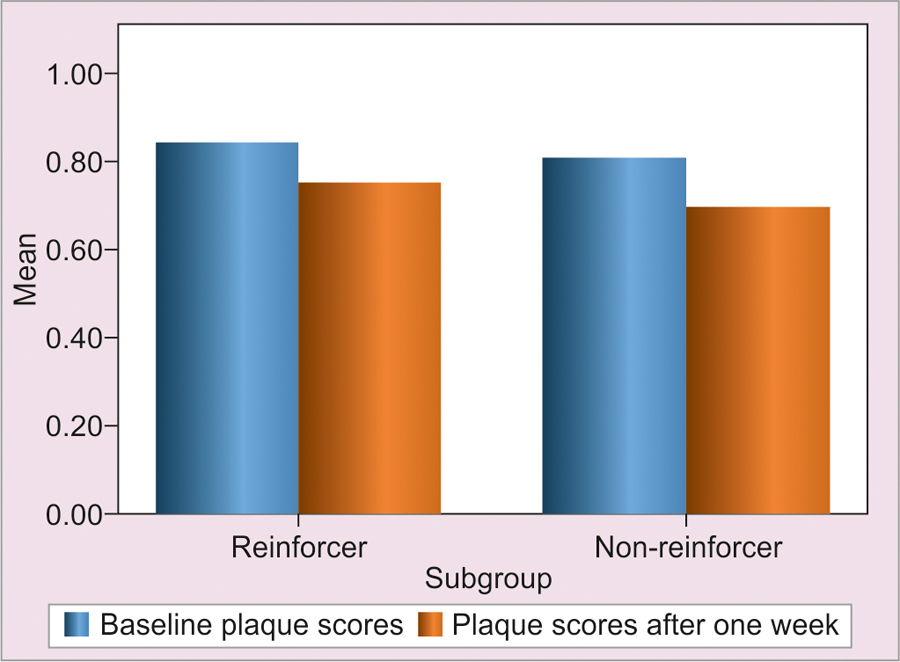 A two-way ANOVA with repeated measures was performed to test the above hypotheses. Repeated measures were used since the readings are taken for two timelines, baseline and after 1 week, i.e., pre- and posttraining session groups.

The analysis was carried out in two stages. The first stage consists of considering all the four groups (control group and three experimental groups), with the aim of testing whether there exists any significant difference in the plaque scores due to (i) different groups, i.e., methods of training; (ii) due to time line, i.e., pre- and posttraining; and (iii) interaction between groups and training methods. Repeated measures ANOVA was performed and the results are given in Table 3.

Table 4: The pairwise difference among the four groups

The hypotheses tested in this study are concerned to experimental group only and the results are listed below:

These results are tabulated in Table 5.

Table 6 shows that there is a significant difference in the plaque scores for pre- and posttraining session groups.

Table 7 shows that the training method “individual as model” is significantly different from other two methods. From Table 1 we can see that the plaque scores for the third method of training is more compared with other two, for both pre- and posttraining sessions. Also, the percentage of dip in the plaque scores is minimum for this method.

A questionnaire consisting of five questions was administered on these 60 samples and the results were analyzed using simple descriptive statistics tools.

For the following three questions, all the three groups of training methods consisting of 20 units answered “yes.” The questions are:

The response of the sample units shows that the training was appreciated by them and they found it effective. For the question, “How many minutes do you brush now?”, the first two groups answered as 2 to 3 minutes, whereas the third group’s response was 3 minutes. When they were asked whether the new method of brushing was easy to learn, 15 out of 20 respondents (75%) in the first group said, “Yes”; 12 out of 20 (60%) in the second group said “yes”; and in the third group 16 out of 20 (80%) found it easy. This shows that the respondents found the individual as model method simplest to follow, followed by the first method individual instruction on cast.

Table 6: Mean of the pre- and posttraining plaque scores of the reinforcer and nonreinforcer groups

Mechanical plaque control can be effective, but needs to be meticulous and patients have to be highly motivated with an appropriate lifestyle (i.e., an appropriate diet, avoid smoking, etc.). Meticulous, self-performed plaque removal measures can modify both quantity and composition of subgingival plaque Dahlen et al.7

The results in the present study have illustrated that there was a significant reduction in the plaque scores due to different training methods compared with control group. This indicates that by giving instructions through various methods, subjects were able to maintain their oral hygiene to some extent. The performance in brushing their teeth was improved by motivation obtained when the three methods of oral hygiene were applied. Daly et al reported that motivation, as demonstrated in this study, is one of the most important factors in ensuring optimal plaque control.9 In the experimental group, although all the methods showed reduction in the plaque scores, the maximum drop in the plaque scores was seen in group 2 (cast group). The result suggest that the subjects could understand the brushing technique better through the cast, which represents the oral cavity model and it was easier for the subjects to perceive the instructions in a better way.

Nearly similar methodology was followed by Srivastava et al. They reported similar results where reinforcement of the brushing techniques again after few days resulted in better reduction of plaque scores in children.2 Yet, in our study, it was found to be less effective. Although there was a significant difference in the plaque scores in the reinforcers and nonreinforcers, it did not influence the subjects in brushing better. It could be attributed to the age of the subjects, as they could understand the instructions well and reinforcement was not very essential.

A small survey was carried out among the participants using a questionnaire to assess the attitude toward the tooth brushing instructions during the follow-up period. The results indicated that all the subjects found the training session to be effective and the individual as model method to be simple to understand followed by individual instruction on cast.

Although brushing is a simple and effective way to remove dental plaque, the prevalence of periodontal disease in the general population shows that it is insufficient.10-12 Oral health education and training were effective in establishing good oral health habits among school children and also in enhancing the knowledge of their parents about good oral health.13,14 Stutcliffe et al concluded that oral hygiene instruction programs have potential value as a means of introducing young children to future dental procedures in a pleasant way as much possible.15 Similar results were reported in other studies, where direct communication with the dentist and chairside motivation for oral hygiene measures were effective motivational tools in improving the oral hygiene and gingival health status of children.16,17