Diabetes mellitus (DM) is a common endocrine metabolic disorder which brings in alterations in the equilibrium of oral tissues and thereby alters the morphological features at cellular level.

Type II is more common than type I diabetes. The major classical findings of diabetes are polyphagia, polydipsia, polyuria, fatigue, and continuous weight loss.2 Frequent determination of glucose concentration in DM patients is an important tool in diabetes management, but requires repetitive venipuncture and finger lancing, which is painful and invasive. Hence, noninvasive or minimal invasive monitoring has been of particular interest. Oral exfoliative cytological study is once such noninvasive technique.3

Oral cytology is a relatively inexpensive, simple, and risk-free technique, i.e., well accepted by the patient with no contraindications.4 The morphologic and functional changes in oral mucosa can be studied at the cellular level by using exfoliative cytology which can help in the diagnosis, with better patient acceptability.3

Diabetes, being a metabolic disorder, has its effect on the metabolism of a cell and has its influence on several tissues in general and oral tissues in particular. There is decreased perfusion to the cell which affects the turnover, differentiation, and decrease in the energy-generating capacity of the cell. The cell and hence, the tissue shows certain changes thereof (Table 1).

Table 1: Diabetes and its effects on tissues1

Smears from buccal mucosa of 100 known cases of DM patients (case group) and 100 nondiabetic healthy persons (control group) were obtained using wooden spatula. The scrapings were transferred to clean glass slides and spread thinly and uniformly and fixed in alcohol. The smears were then subjected for hematoxylin and eosin (H&E) staining and were observed for cellular alterations like micronuclei, enlarged nuclei, perinuclear halo, binucleation, cytoplasmic streaks, presence of Candida, bacterial colonies, and inflammatory cells. Cells with clumping and overlapping were not included in the analysis. Subjects were selected considering the following inclusion and exclusion criteria (Table 2).

Results were tabulated and statistically analyzed using chi-square test and Fisher’s exact test. p-value ≤ 0.05 was considered to be statistically significant. The study was approved by the Ethical Committee of the institution.

In our study, smears from the buccal mucosa were evaluated using H&E staining. In comparison between cases and control groups, among the case group, the frequency of micronuclei (Fig. 1), enlarged nuclei (Fig. 2), perinuclear halo, and binucleation (Fig. 3) were found to be statistically significant. Presence of candida and inflammation (Fig. 4), cytoplasmic streaks (Fig. 5) were assessed and compared statistically between cases and control groups and were found to be significant (Table 3, Graph 1).

Table 3: Comparison of variables between cases and controls 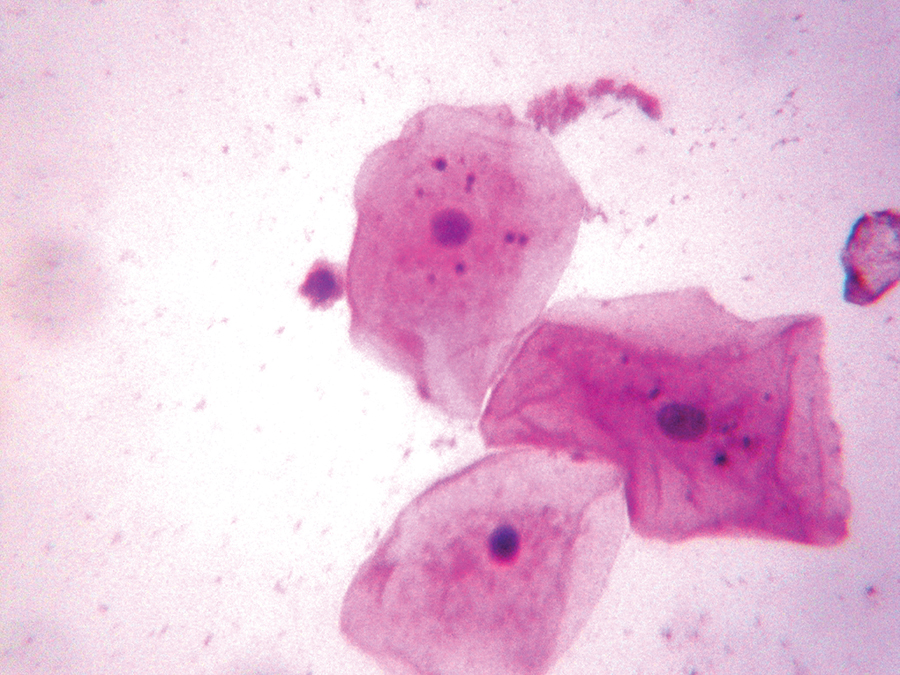 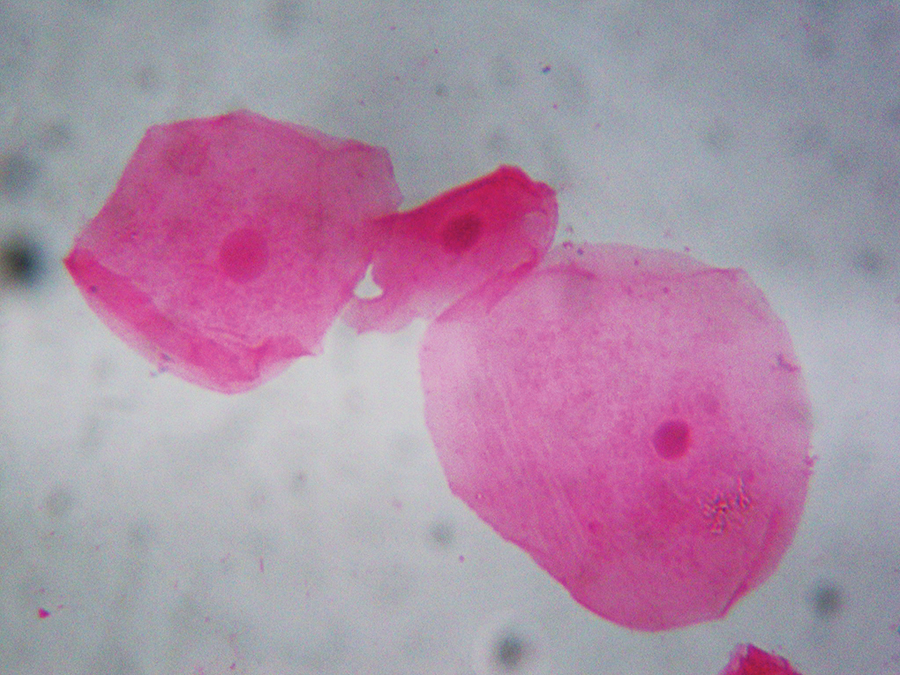 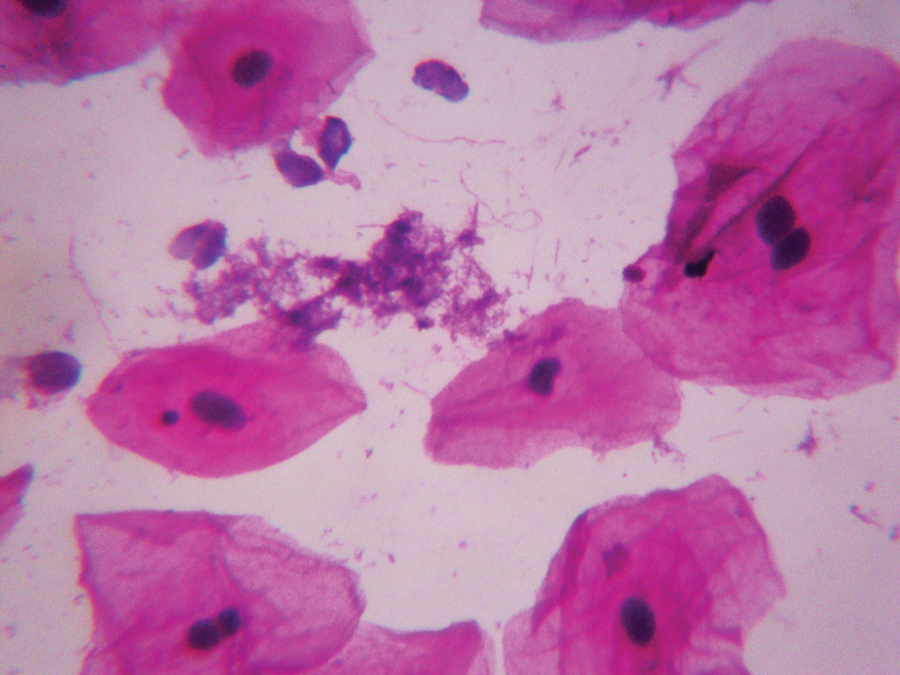 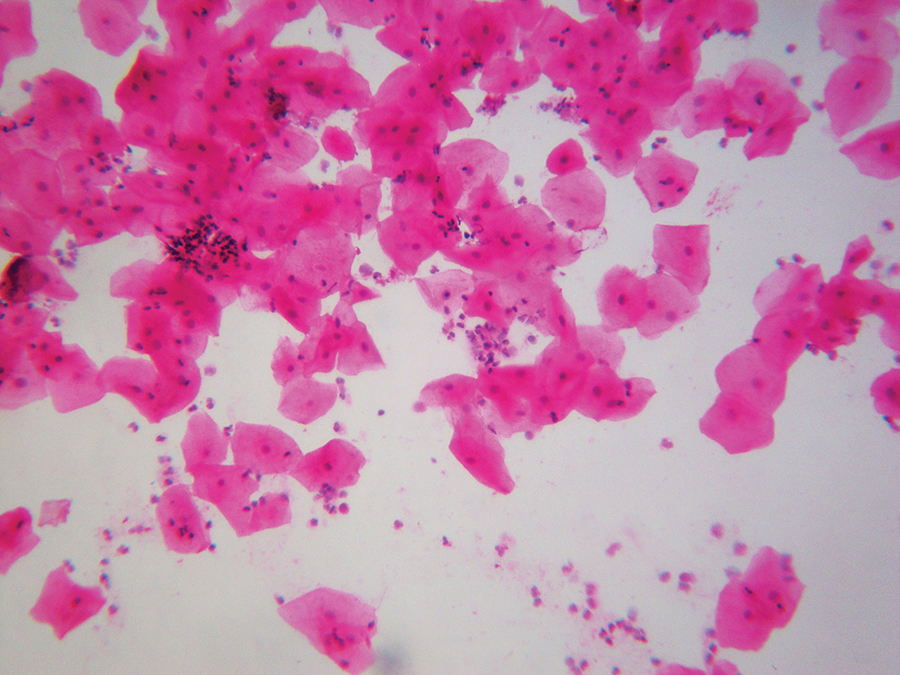 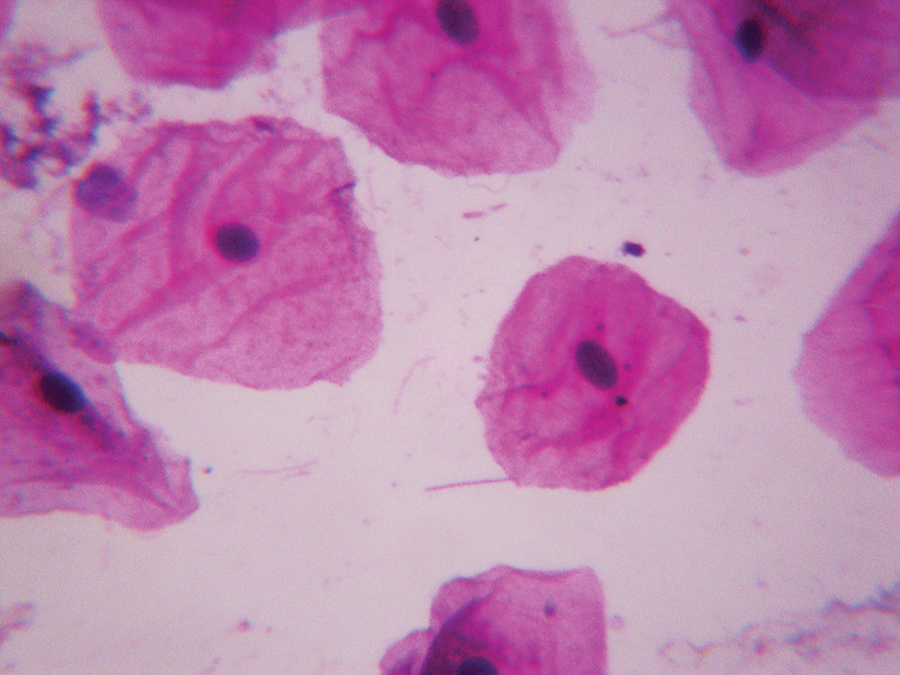 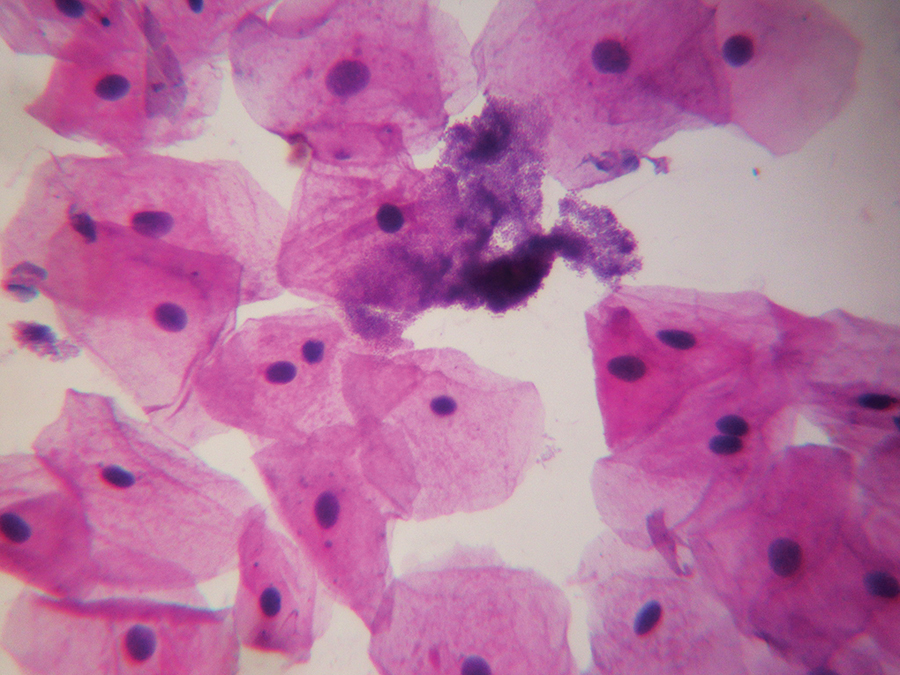 Graphical representation of variables between cases and controls 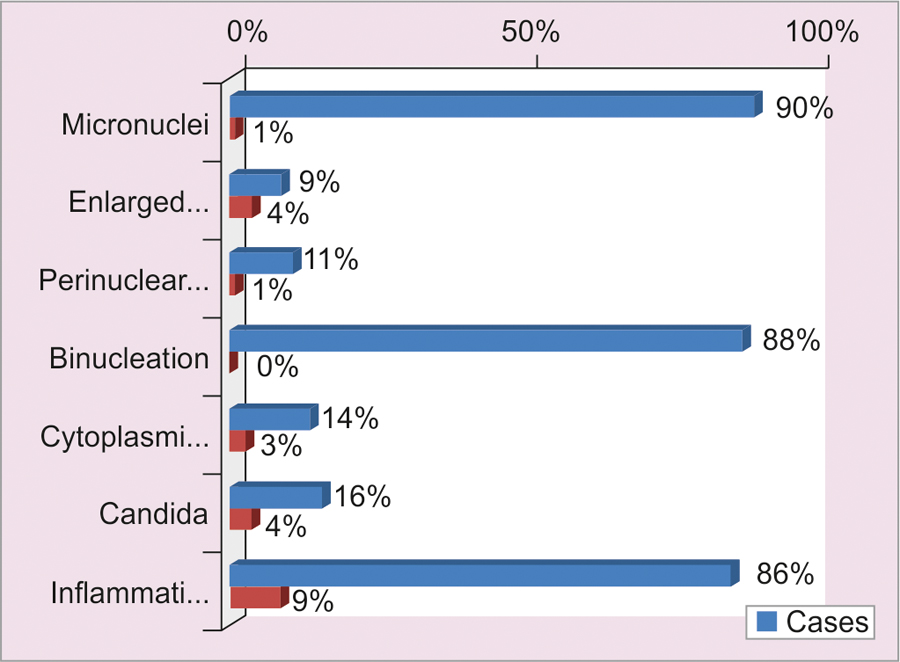 Epithelial cells undergo continuous renewal as a part of normal physiologic turnover. They move from the basal layer to the surface and are exfoliated.5 In DM, the cellular turnover is affected. Exfoliative cytology, being a noninvasive technique, allows simple and pain-free collection of intact cells from different layers within the epithelium for microscopic examination.

The term micronucleus (MN) test was suggested for the first time by Boller and Schmidt. It is defined as a microscopically visible round to oval cytoplasmic chromatin mass next to the nucleus. Micronucleus is an extra-nuclear cytoplasmic body which projects as a biomarker of chromosomal damage.6 Several studies have been conducted on micronuclei assay on the exfoliated cells of buccal mucosa of diabetic patients and have found that the frequency of micronuclei was increased in diabetic patients as compared to the normal individuals. Our results were consistent with the similar study conducted by Shashikala et al,6 Kashyap and Reddy,7 Holland et al,8 which showed increased prevalence of micronuclei in diabetic patients as compared to the normal individuals.

One of the parameters considered for the study was enlarged nuclei. In DM, there is decreased perfusion of the cells, which leads to decreased cellular turnover and keratinization. This delay in differentiation process of epithelium will lead to increase in the cells, which present a large nucleus as a primary characteristic.9 Delay in keratinization is attributed to glycogen changes. Sustained hyperglycemia causes greater accumulation of advanced glycation end products by abnormal glycation of proteins, lipids, and nucleic acids in the walls of large blood vessels as well as in basement membrane of the microvasculature.1

Increase in nuclear size might be an indicator of cellular ageing in diabetic patients. Decreased cellular turnover as a result of ischemia following atherosclerosis would result in more number of mature cells with large nuclei in the smear. Aging would also produce various morphologic alterations in cells in the form of pleomorphism, bilobed nuclei, cytoplasmic vacuolizations, etc.3 In our study, we were able to note such morphologic variations in epithelial cells from diabetic patients. A study conducted by Prasad et al,9 on 50 diabetic patients using PAP stain, showed that there was an increase in nuclear area in diabetic patients as compared to the normal individuals.

Oral candidiasis is seen more frequently in diabetic patients than in nondiabetics as they are more likely to have xerostomia and atrophic oral mucosa due to dehydration caused by the disease process as well as due to decrease in salivary flow rates. This is also associated with superadded infections like candidiasis, which can evoke a chronic inflammatory response in the oral mucous membrane.9 A study by Pallavan et al10 using PAP stain showed presence of severe candidal colonization in diabetic patients than the normal individuals.

A study conducted by Baban and Garib4 on 40 type II patients using PAP stain obtained from both buccal and gingival tissue showed that the study group showed bi and tri-nucleation and perinuclear halo. Cells from newly diagnosed diabetics showed irregular-shaped nuclei and increased inflammatory cells in the gingival smears.

The scientific literature lacks sufficient relevant data, in relation to the use of H&E stain in oral exfoliated cells in diabetes. Further detailed studies are required to ensure the validity of this stain. Moreover, H&E stain is considered the primary and routine stain, inexpensive, widely used with easy interpretation of cellular details.

Other stains that can be used to study the exfoliated cells are PAP and PAS.

Diabetes mellitus is a silent metabolic killer with vast harmful effects on various organs. It affects the tissues at cellular level and cripples the normal functioning of the cell, which is manifested as various changes in the cell morphology. Our study is a basic study conducted on diabetic patients to observe the cytomorphological variations using exfoliative cytology as a diagnostic adjunct.