Hand-foot-mouth disease (HFMD) was first described by Robinson et al1 following an outbreak in Toronto in 1957. It is characterized by the appearance of vesicles on the mouth, hands, and feet. Coxsackie Virus (CV)-A16 was isolated. The disease rarely occurs as an epidemic, but in countries like China around 500,000 to 1 million cases are noted per year.2 It usually occurs in early summer season,3 but studies show a higher incidence rate in the temperature range of 21.1°C to 26.6°C,4 with greater predilection in children between the ages of 0 and 5 years4,5 and in immunocompromised adults. As far as the sex predilection is concerned, there is greater incidence in males than females.4,6,7 However, it can occur in immunocompetent adults5,8 in rare instances, the key causative agents being enterovirus (EV)-71, CV-A16, and also CV-A6 and CV-A10.9-11 Main routes of transmission are from person to person via oropharyngeal secretion or by direct vesicle contact. Feco-oral route and contaminated objects are also possible modes of transmission.12 Incubation period ranges from 3 to 7 days starting with initial viral implantation in the oral cavity and ileum spreading to the regional lymph nodes within 24 hours. Viremia followed by pyrexia occurs within 72 hours followed by secondary infection and viral seeding in areas, such as oral mucosa, hand, and feet. Usually after a week, there is an increase in antibody levels and the disease begins to disappear.13 Oral lesions are the first and usually the only clinical signs of the disease, so the dentists must be aware of this to quickly diagnose the condition. Only later do the lesions begin to appear in the extremities.12

Diagnosis is primarily made by observing the clinical signs of the disease, such as fever and characteristic lesions presenting in the oral cavity, hands, and feet. Confirmation of the diagnosis is carried out by isolating the virus responsible or by identifying virus-neutralizing antibodies in the patient’s serum.5

The disease is mostly self-limiting and due to lack of a virus-specific therapy, the treatment is usually symptomatic. To relieve oral discomfort, an oral rinse with an anesthetic is prescribed along with an antipyretic for controlling fever. In addition, patients are advised plenty of fluids and to avoid spicy and acidic food. In most cases, prognosis is good with scabs or scars; however, there have been reports of onychomadesis (falling of nails)14-16 associated with the disease. In some severe cases, there have been reports of neurological disorders, such as meningitis (EV-4), Guillain–Barré syndrome, meningoencephalitis as well as paralytic polio, myoclonus mainly in children under the age of 5 years (who are the main risk group of the population). It has also been demonstrated that these patients have low levels of vitamin A and reduced immunity.17

A 47-year-old immunocompetent male reported to the clinic with a complaint of discomfort in the oral cavity and difficulty in swallowing food along with burning and itching sensation in the throat. The patient also had mild pyrexia of 37.8°C and general malaise at that time, but medical history seemed to be normal.

Intraoral examination revealed small erythematous lesions located on his hard palate and small ulcers on the tonsillar pillars and right buccal mucosa (Figs 1A and B). The examination also found maculopapular lesions on the palms of his hands and on the soles of his feet (Figs 2A and B), some of which were in the form of blisters and upon further questioning, the patient stated that few days ago (about 8–10 days) his son aged 9 years suffered a similar condition and was examined and diagnosed with HFMD by the pediatrician. Based on this history, we came to a provisional diagnosis of the same condition and we took a detailed record with relevant photographs of the oral cavity, lesions of hand and feet, and also referred him to a medical specialist with this provisional diagnosis mentioned in the case sheet.

(A) Intraoral view of lesions on hard palate; and (B) tonsillar pillars 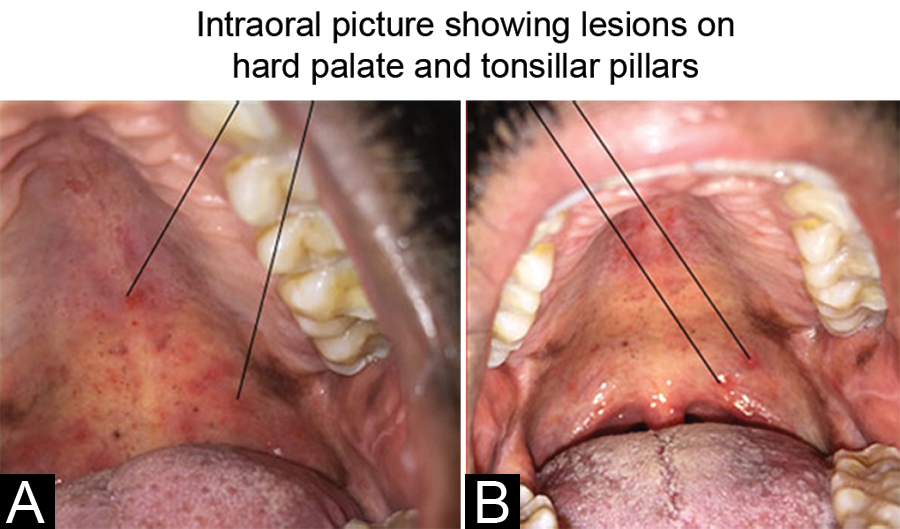 The medical specialist also confirmed the diagnosis of HFMD and treated him with an antipyretic (paracetamol 650 mg) and an antihistamine for 5 days and topical calamine lotion for his hands and feet. We called the patient after a week and observed that the oral lesions had completely subsided, but the hand and foot lesions were healing and the skin showed peeling with red discoloration in his palms and soles.

Hand-foot-mouth disease is a highly contagious disease mainly caused by EVs. The initial presentation includes erythematous papules on the palms, soles, and in the oral cavity accompanied by prodromal symptoms, such as myalgia, mild pyrexia, and abdominal pain. The lesion usually evolves into vesicles which are painful, covered by a yellowish pseudomembrane and surrounded by an erythematous halo measuring up to about 5 mm in diameter. Constant movement in the oral cavity results in disruption of the membrane covering the lesion. Vesicles present in the skin can vary in number and usually appear on the sides and back of the fingers and soles of the feet. The condition is usually asymptomatic. Children and immunocompromised adults are more susceptible, but HFMD is rare in immunocompetent adults. In view of the differential diagnosis for this condition, the possible lesions to be considered are primary herpetic gingivostomatitis, herpangina, erythema multiforme, aphthous stomatitis, and varicella. Inappropriate drugs must not be administered without a correct diagnosis.18,19 Diagnosis is mainly through clinical features along with histopathological examination of the vesicles. Recent diagnostic method studied by Yu et al20 is by use of immunoglobulin M enzyme-linked immunosorbent assay in EV-71 and CV-A16 infection to correctly identify the virus causing the disease in patients. Onychomadesis need not be treated except by keeping the nail area clean, and in most cases, it is self-healing over a course of several weeks.16 All studies correspond to EV-71 being the causative agent for manifestation of HFMD, and children in age group of 2 to 4 years are the prime risk group.

(A) Maculopapular lesions on hands; and (B) lesions on the soles of feet 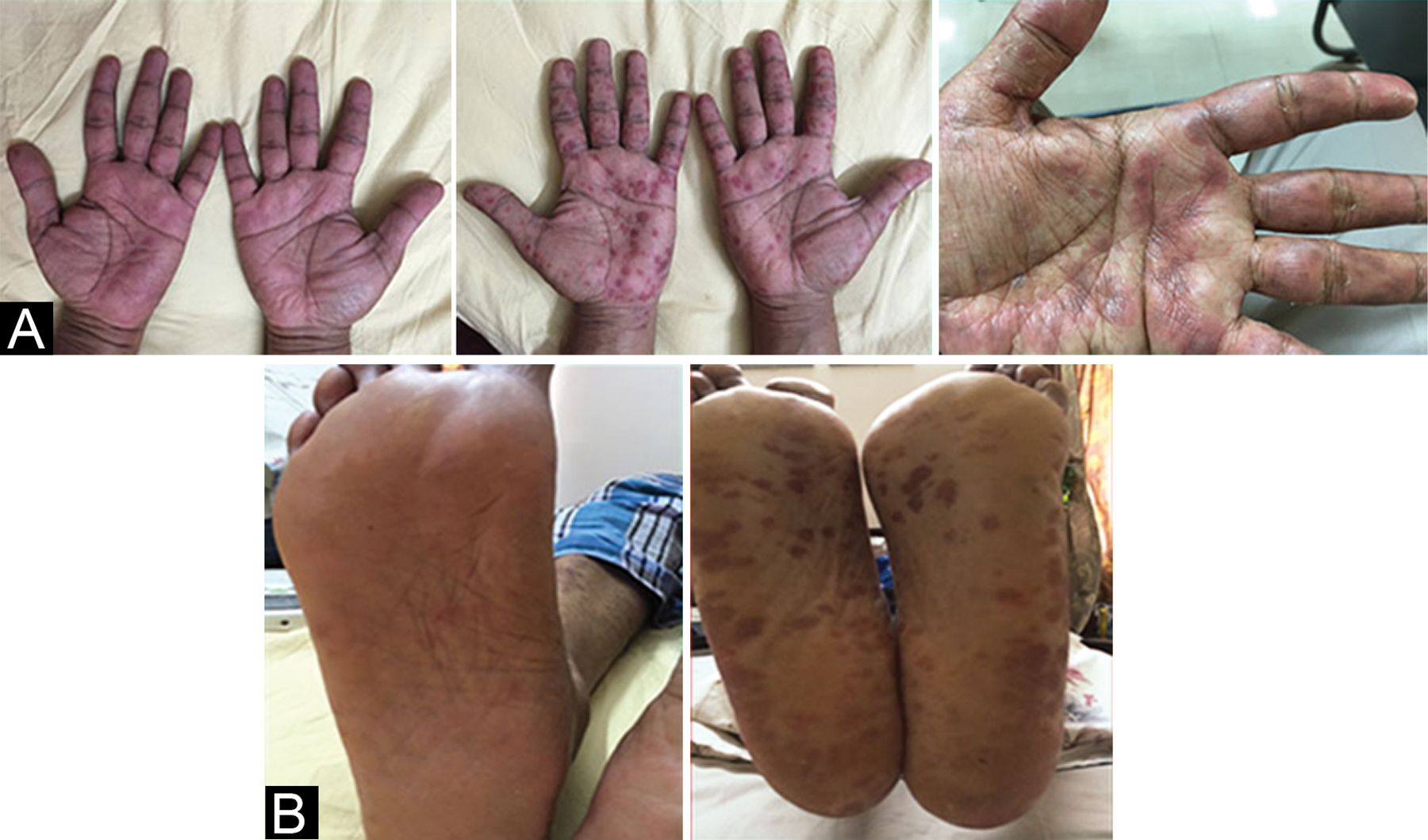 Vaccination has been a key in the prevention of this infection. The most recent vaccine for the year 2015 is formalin-inactivated EV-71 (FI-EV-71) developed and verified through human trials and found to provide adequate protection against EV-71, but nevertheless, there is no approved vaccine available for treating and preventing EV-71 infection. An important aspect of preventing the disease is that HFMD patients should be kept isolated until the fever and skin and mucosal lesions have resolved as this stage of the disease is potentially contagious. Disease spread also occurs through sharing utensils or through feces and oronasal secretion, so frequent handwashing should be given importance.

Emphasis is to be laid on the fact that dentists play an important role in identifying this condition earlier than other specialists and awareness must be given to patients to visit the dentist for periodic checkups, which aid in early identification of the condition, thereby potentially preventing its spread to the community as the condition is contagious and the patient must be educated to prevent spread of the disease to other members of his/her family.