The main requirement of root canal treatment is possessing thorough knowledge of internal and external root anatomy. This aspect is to be coupled with correct diagnosis and appropriate mechanical and chemical cleansing of the entire pulp cavity and its complete filling with an inert filling material.1

Slowey2 emphasized that root canal morphology was limitless in its variability and that clinicians must be aware that anatomic variations constitute an impressive challenge to endodontic success. Undetected extra roots or root canals are a major reason for failure of root canal treatment.

With increasing reports of aberrant canal morphology, the clinician needs to be aware of this varied anatomy. The purpose of the present article is to report the successful nonsurgical management of a four-rooted left permanent mandibular second molar having four roots and five root canals (two in distobuccal root, one in distolingual root, one in mesiobuccal root, and one in mesiolingual root).

A 60-year-old man was referred with a chief complaint of tooth decay in his lower left back teeth for 2 months. History revealed intermittent pain in the same tooth during mastication. The patient’s medical history was noncontributory. Clinical examination revealed a decayed left mandibular second molar (tooth #14). Neither fistulae nor edema was observed in the soft tissues. There was no pain or tenderness to palpation; tooth mobility was within physiological limits, and the gingival attachment apparatus was normal. The tooth was tender to vertical percussion. Thermal and electric pulp testing (Parkel Electronics Division, Farmingdale, New York) elicited a negative response. The preoperative radiograph showed widening of the periapical periodontal ligament space in relation to the mesial root apex. From the clinical and radiographic findings, a diagnosis of pulpal necrosis with symptomatic chronic apical periodontitis with tooth #14 was made, and endodontic treatment was initiated. Preoperative radiographic evaluation of the involved tooth indicated variation in the root/root canal anatomy (Fig. 1A). The mesial surface of the tooth was restored with composite resin (Z100; 3M Dental Products, St. Paul, Minnesota) after caries excavation to enable better isolation. The tooth was anesthetized by using 1.8 mL (30 mg) of 2% lidocaine containing 1:200,000 epinephrine (Xylocaine; AstraZeneca Pharma Ind Ltd, Bangaluru, India). A rubber dam was placed, and a conventional endodontic access opening was established. The pulp chamber floor was shown to have four canals. On further inspection and placement of file in distobuccal orifice, the file had a deviation, and so on further inspection with DG 16 endodontic explorer (Hu-Friedy, Chicago, Illinois, USA), another canal was located. Coronal enlargement was done with a nickel titanium (NiTi) ProTaper SX rotary file (Dentsply Maillefer, Ballaigues, Switzerland) to improve the straight-line access. Working length was determined with the help of an apex locator (Root ZX; Morita, Tokyo, Japan) and later confirmed by using a radiograph. Multiple working length radiographs were taken at different angulations to identify the second canal in distobuccal root canal.

Cleaning and shaping were performed under rubber dam isolation by using ProTaper NiTi rotary instruments (Dentsply Maillefer), with a crown-down technique. Irrigation was performed by using normal saline, 2.5% sodium hypochlorite solution, and 17% ethylenediaminetetraacetic acid. The access and instrumentation up to this point were carried out. After completion of cleaning and shaping, the root canals were dried with absorbent points (Dentsply Maillefer). Calcium hydroxide (Calcicur; VOCO, Cuxhaven, Germany) was placed as an intracanal medicament with a lentulo spiral (Dentsply Maillefer), and the access cavity was sealed with Cavit (3M ESPE Dental Products, St. Paul, Minnesota).

At the next appointment, 1 week later, the tooth was asymptomatic. The calcium hydroxide was removed with ultrasonic instrumentation, and a final irrigation was performed with 2% chlorhexidine. The canals were dried with absorbent points (Dentsply Tulsa) and filled using cold lateral compaction of gutta-percha and AH-Plus sealer (Dentsply Tulsa). The tooth was then restored with a posterior composite resin core (P60; 3M Dental Products, St. Paul, Minnesota). A postoperative radiograph (Fig. 1D) was taken, and the patient was asymptomatic during the follow-up period.

The development of various areas of dentistry requires precise study of morphology of human teeth, so that better oral health can be provided. The mandibular molars play a principal role in mastication and help to maintain the vertical dimension of the face, continuity of the dental arch, thus maintaining the cheeks and tongue in their position, and, therefore, maintaining the stomatognathic function.

The clinician must, therefore, be fully aware of dental morphology in order to provide better care.9 Most endodontic and dental anatomy books describe the mandibular second molar as having two roots, one mesial and one distal with two, three, or four root canals.10-13 However, a mandibular second molar with a conical root and wide single root canal is also reported.14 Weine15 stated that this tooth may have more anatomical variations than all other molar teeth. When only one root is present, the root canal system may present only a broad root canal, two canals that may or may not join, or a C-shaped canal. Researchers have shown that the anatomy of mandibular molars requires much attention since the number of roots and canals are quite variable.

Neelakantan et al16 have studied root and canal morphology of mandibular second molars in an Indian population. They analyzed 345 molars for the morphology of the roots and root canal systems. The teeth were subjected to a canal staining and clearing technique, after which they were examined under magnification: Number and morphology of roots, number of root canals, root canal system configurations, number of apical foramina, and intercanal communications. They reported most second molars had two separate roots (87.8%) with three canals. C-shaped canal morphology was observed in 7.5% of the teeth examined. Both the mesial and distal roots of two rooted molars showed wide variations in canal number and configuration. Type IV and I canal anatomies were the most common in the mesial and distal roots of two rooted second molars respectively. Approximately 54.84% of the teeth showed two apical foramina, and one specimen (3.8%) of the C-shaped roots showed three apical foramina. 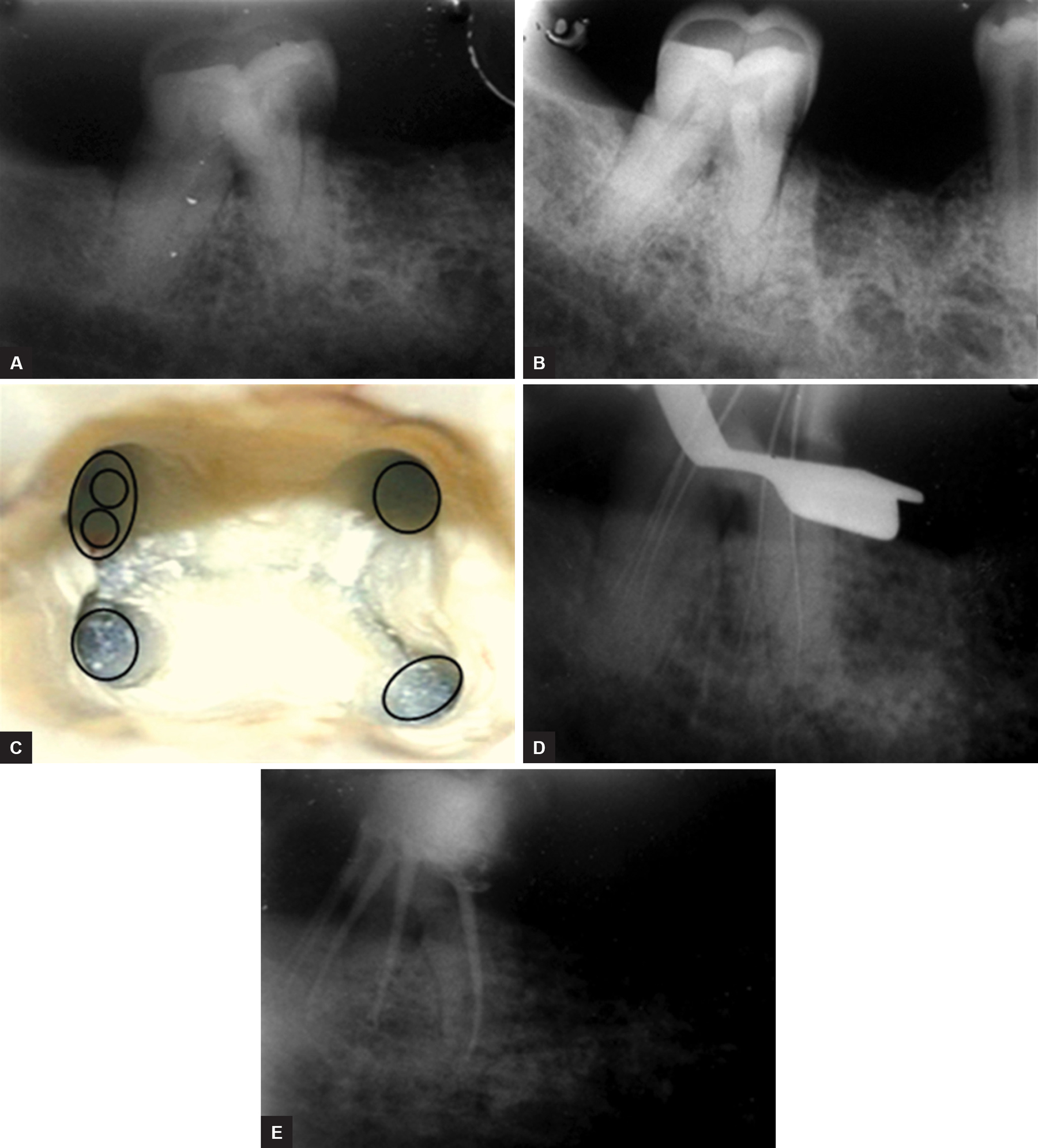 In certain circumstances, root canals may be left untreated during endodontic therapy if the practitioner is unable to detect their presence.20 The presence of extra roots is readily determined using routine radiography, as demonstrated in the current case. Knowledge of anatomic aberrations, such as root position, root shape, and relative root outline will also help to decrease the failure rate of root canal therapy. From a clinical standpoint, when the initial radiograph shows the image of an unusual anatomic form, it is recommended to take a second radiograph for additional information particularly with a mesial or distal projection.21

The conventional root canal anatomy indicates the location of the initial access. The knowledge of both the normal and abnormal anatomies of molars shows the parameters under which root canal therapy is to be performed and can directly modify the probability of success. This is the reason why clinicians should be aware that variations in tooth morphology may well occur. Failure to treat a canal is an obvious reason for root canal treatment failure. Therefore, all clinicians must make every effort to locate and treat all existing canals during endodontic treatment.

This case report was a rare case that showed four roots in mandibular second molar with five root canals (two in distobuccal root, one in distolingual root, one in mesiobuccal root, and one in mesiolingual root). It elaborates the importance of adequate knowledge about root canal morphology for a proper complete endodontic treatment of such three-rooted canalled teeth.

Anatomic variation in the number of roots and root canals can occur in any tooth. Close examination of radiographs taken from different angles and careful evaluation of the internal anatomy of teeth is essential or else root canal treatment is likely to fail, if extra roots or root canals are not detected.