The surgical removal of lower third molars is still the most common procedure performed by oral and maxillofacial surgeons.1 The removal of impacted third molars by surgical means involves trauma to soft and hard tissues and can result in significant postoperative sequelae.2

Third molars show a high incidence of impaction and are often associated with diverse conditions, such as pericoronitis, periodontal pocket in the distal aspect of the second molar, caries formation in third molar or second molar, pressure resorption of second molar, and different types of cysts and odontogenic tumors. The removal of impacted tooth usually involves incision, flap reflection, and bone removal, which results in considerable postoperative pain, swelling, and trismus.3

To reduce these postoperative complications, therefore seems to be a logical goal. Many clinical studies have investigated the treatments to reduce postoperative sequeale by using antiseptic mouthwashes, use of drains, flap design, antibiotics, enzymes, corticosteroid treatment, muscle relaxants, and physiotherapy. Among them, the use of corticosteroids has gained wide acceptance.

Corticosteroids that have extensively been used in dentoalveolar surgery are dexamethasone and methylprednisolone, owing to their nearly pure glucocorticoid effects, virtually no mineralocorticoid effects, and the least adverse effects on leukocyte chemotaxis.2

Dexamethasone is a white odorless compound, which is slightly soluble in water. It has a melting point of 240 to 260°C. It is a synthetic analog of prednisolone in which a methyl group has been added at the carbon 16 position and a fluorine atom at carbon 9 position. It has been known that the addition of fluorine at the carbon 9 position enhances the anti-inflammatory activity of dexamethasone.4

Dexamethasone has a longer duration of action than methylprednisolone and is found to be more potent of the two.2 It has no mineralocorticoid activity and the half-life is roughly 36 to 72 hours. The potency of dexamethasone is about 20 to 30 times that of natural corticosteroid.5 It is also considered to have the least depressing effect on leukocyte chemotaxis. Dexamethasone has been extensively used in oral and maxillofacial surgeries because of its very potent nature and long half-life.

Intramuscular route has been the most commonly prescribed route in outpatient settings and gives good plasma concentration of the drug and prolonged anti-inflammatory action. The submucosal route is well suited for third molar surgery, as the injection is given in close proximity to the operative field and local infiltration of dexamethasone injected submucosally around the site of surgery is expected to provide slow absorption and prolonged duration of action.

This study was designed to compare the effect of preoperative administration of inj. dexamethasone given via the submucosal and IM routes, on the postoperative sequelae after removal of impacted lower third molars.

Objectives of the study:

Dexamethasone is a member of the glucocorticoid class of corticosteroids. It is a synthetic corticosteroid, highly potent, and has anti-inflammatory and immunosuppressant effects. Its potency is 25 times that of cortisol in terms of its glucocorticoid effect, while it has minimal mineralocorticoid activity.

It is included in the World Health Organization's List of Essential Medicines, which enlists the most important medications needed in a basic health system.

The pH of the solutions is adjusted using sodium hydroxide and/or hydrochloric acid.

Dexamethasone is a long-acting synthetic adrenocorticosteroid with glucocorticoid activity. It has no mineralocorticoid activity, the half-life is around 36 to 72 hours, and the drug is 25 times more potent than hydrocortisone. It is also considered to have the least adverse effect on leukocyte chemotaxis.1

Dexamethasone is known to have anti-inflammatory and immunosuppressive actions. Glucocorticoids prevent the development of the inflammatory response. They also inhibit capillary dilation and phagocytosis and appear to prevent the hypersensitivity response.

The principal metabolic actions of dexamethasone are on carbohydrate, protein, and calcium metabolism. Dexamethasone also influences the mobilization, oxidation, synthesis, and storage of fats. Dexamethasone causes inhibition of endogenous corticotropin secretion by suppressing the release of adrenocorticotropic hormone from the pituitary.

Dexamethasone being a synthetic derivative is less extensively protein bound and more slowly metabolized than hydrocortisone, and, hence, has a longer duration of action. Dexamethasone penetrates into tissue fluids and cerebrospinal fluids. The corticosteroids are metabolized mainly by hepatic microsomal enzymes. These metabolites are further conjugated with glucuronic acid and sulfate and are excreted in urine. Small amounts of unchanged drug are also excreted in the urine.

Study sample included 90 patients who underwent surgical extraction of impacted mandibular third molars. The patients were divided into three groups of 30 each:

Facial swelling on the operated side was evaluated by two facial measurements (Figs 1 and 2):

Evaluation of facial swelling. (A) Tragus—midline; and (B) gonion—lateral canthus 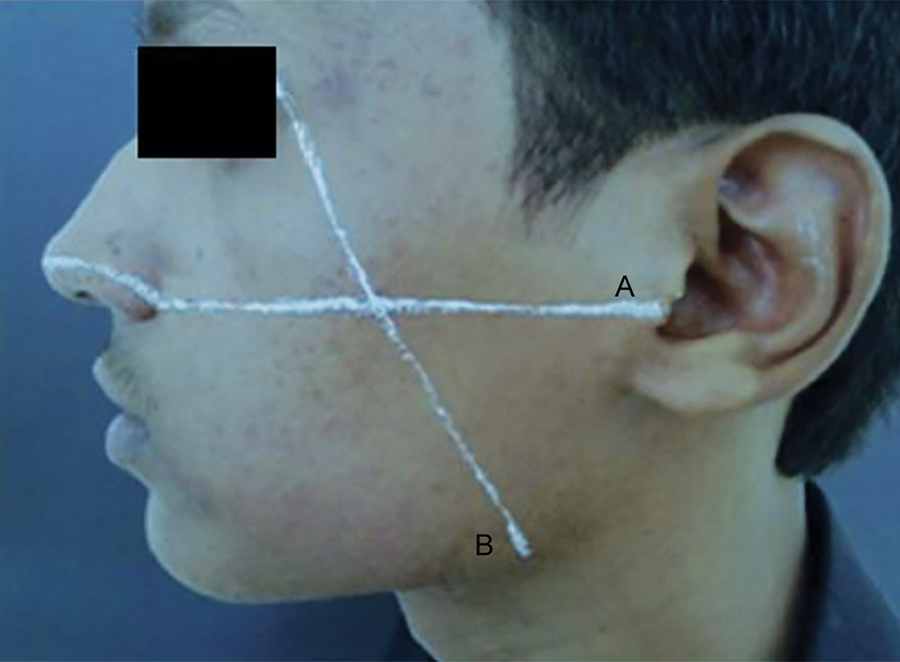 Evaluation of facial swelling. (A) Tragus—midline; and (B) gonion—lateral canthus 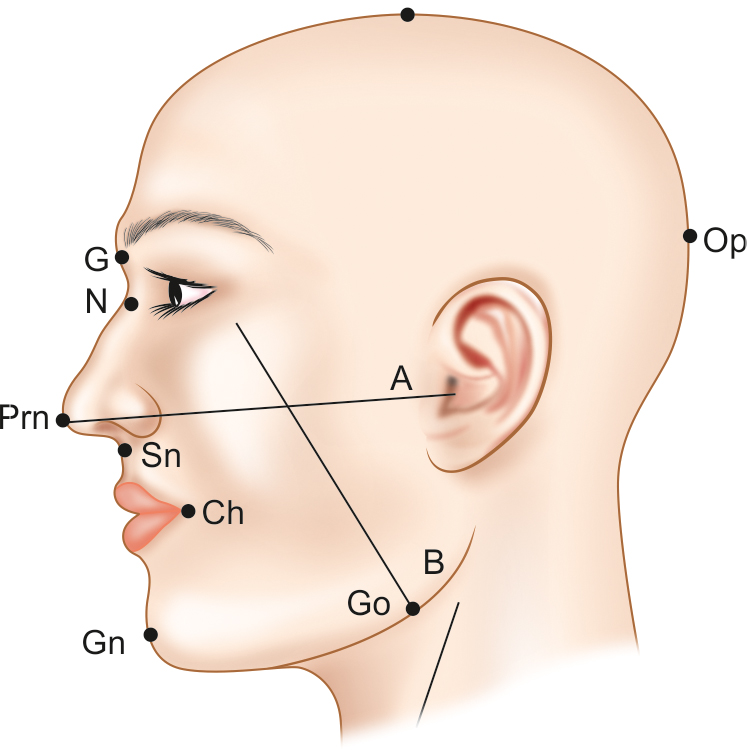 This was done using a flexible measuring tape. The preoperative sum of two values was taken as the baseline for that side.

Facial measurements were made subsequently on 1st, 3rd, and 7th postoperative days and compared with the baseline.

Maximal mouth opening was recorded preoperatively, which was taken as baseline.

Mouth opening values were recorded subsequently on 1st, 3rd, and 7th postoperative days and compared with the baseline for evaluation of trismus.

Regular postextraction instructions were given. All patients were given amoxicillin 500 mg thrice daily for 5 days, and tramadol 50 mg orally as required as rescue analgesia. Chlorhexidine mouth wash was to be used twice daily starting 1 day after operation for 5 days.

There were 54 men and 36 women in the age range of 19 to 45 years. Following completion of clinical study on the patients, the measurements and data taken from all patients were tabulated for statistical studies. The results of our study are described in brief as follows: 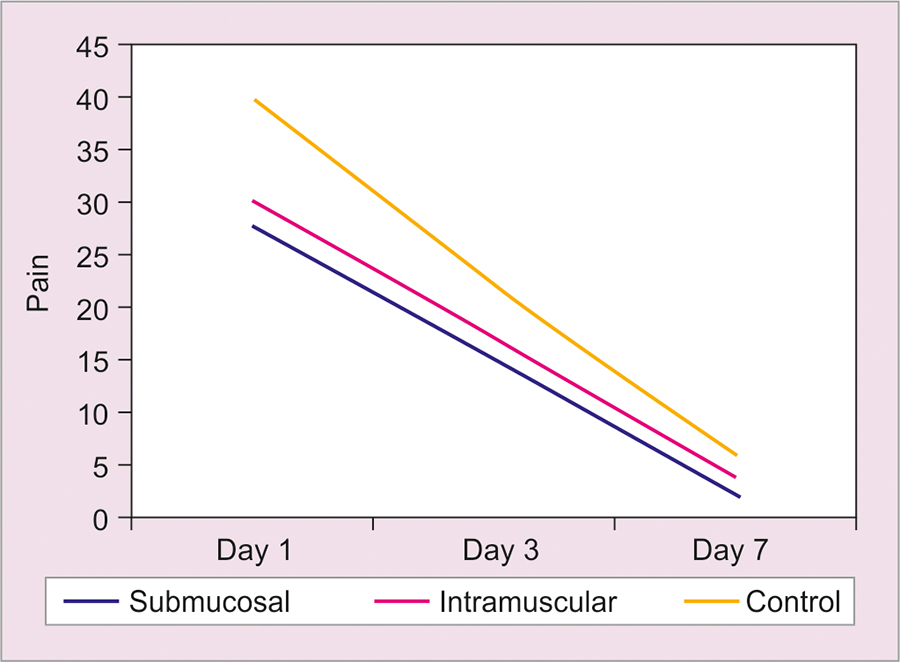 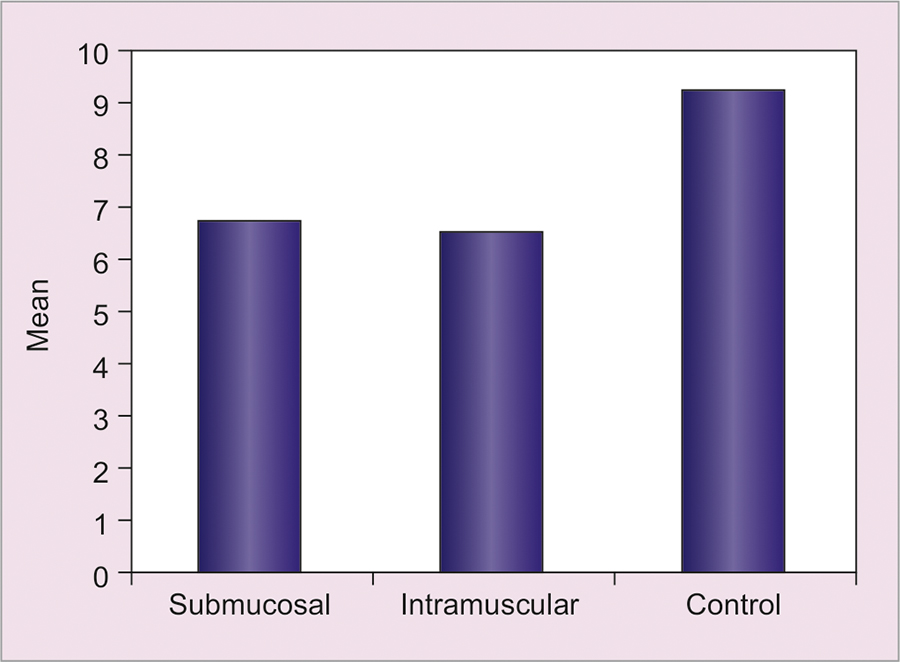 Mean increase in swelling on day 1, day 3 and day 7 treatment-wise 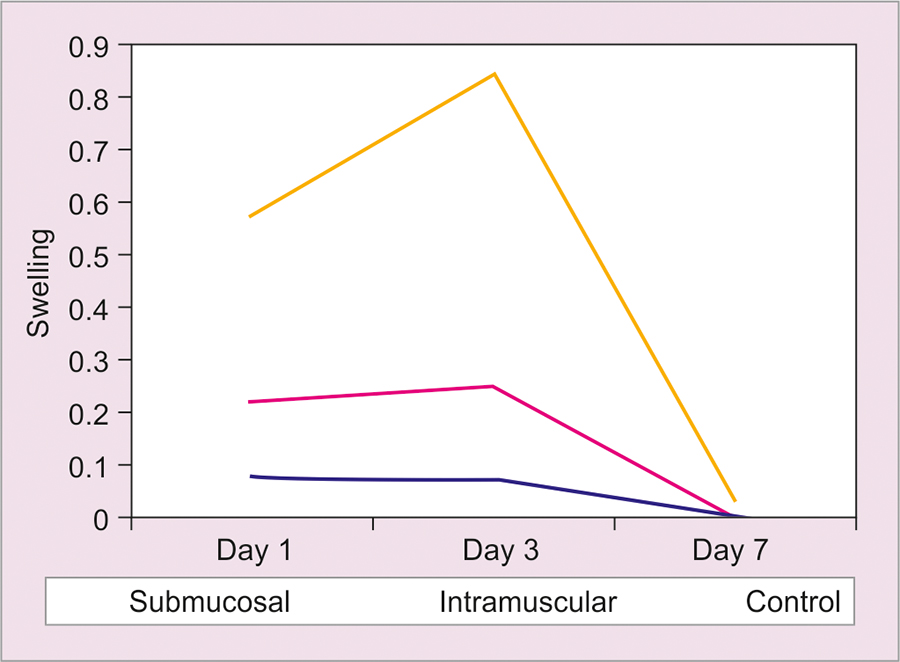 Patients in the control group consistently had lower maximal interincisal opening on the 1st and 3rd postoperative days as compared with the dexamethasone-treated groups (Tables 9 to 12 and Graph 4). However, there was no significant difference among the dexamethasone-treated groups for the above parameter. The interincisal mouth opening values reached baseline in all the three groups by the 7th postoperative day. 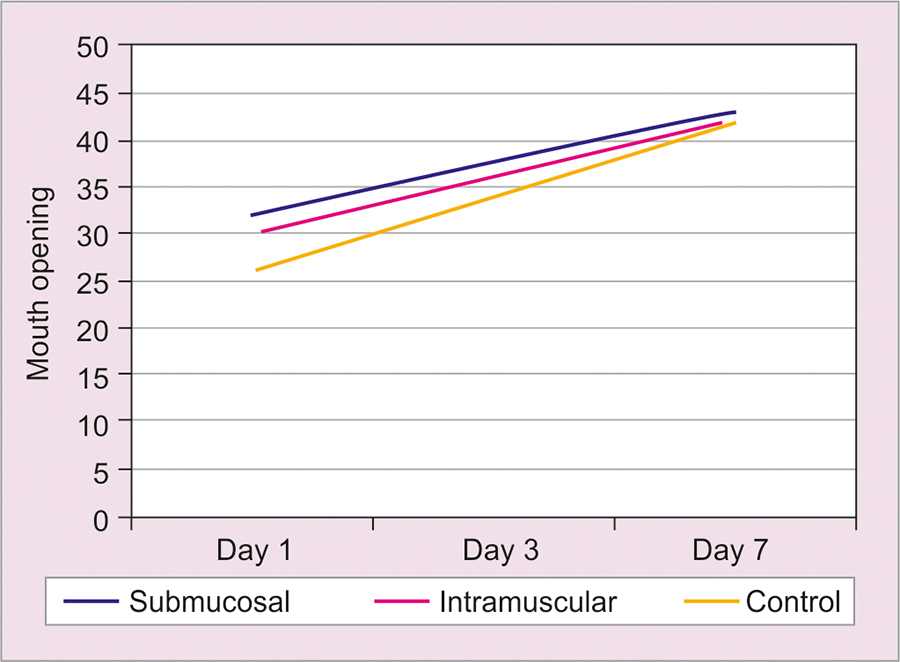 Mean and standard deviation of mouth opening at baseline treatment-wise

To see which of the treatment groups are significantly different, the least significant difference technique was used by taking two treatments at a time.

The removal of impacted third molar by surgical modality can result in considerable pain, swelling, and dysfunction. The factors that contribute to postoperative pain and edema are complex, but many of the these factors correlate to the process of inflammation. Careful attention to surgical techniques will minimize the sequelae of inflammation, but will not prevent them.7 Postoperative inflammation is a biological response characterized by increased vascular permeability, increased movement of leukocytes into the inflamed area, and the release of chemical mediators of inflammation. By controlling the extent of the inflammatory process, using pharmacologic measures, postoperative complications, such as pain, swelling, and trismus, can be minimized.7,8

Dexamethasone is available in oral, parenteral, and topical formulations, and is largely used in oral surgery due to its high efficacy and long half-life. In our study, we aimed to evaluate the effectiveness of dexamethasone given via two different routes (submucosal and IM) on postoperative sequelae after impacted third molar surgery.

Postoperative edema can be controlled with dexamethasone administered in the submucosa. Grossi et al2 compared dexamethasone given in two different doses (4 or 8 mg) as a submucosal injection. It was reported that both dosages improved swelling vs untreated groups, but no difference was observed between the dosage regimens. In striking contrast with this observation, Laureano Filho et al12 reported that in patients undergoing surgery for impacted third molars, administration of 8 mg dexamethasone 1 hour before surgery produced a better control of swelling compared with treatment with 4 mg dexamethasone.

In the present study, submucosal dexamethasone 4 mg given half an hour preoperatively, showed a significant reduction of swelling on all postoperative intervals as compared with the controls, which is in agreement with the previous studies.2,13 These results add more strength to the concept that locally applied dexamethasone near surgical site in a subtherapeutic dose (4 mg) is a valuable tool to reduce edema after third molar surgery.

Unlike previous studies that reported only a limited effect on trismus and pain, our patients showed significantly less trismus and pain at all times of evaluation in the submucosal group as compared with controls, which may have been the result of higher concentration of drug at the site of injury.

Although there is an agreement about their effects on swelling, the role of corticosteroids in the prevention of postoperative pain is controversial. Recently, Waldron et al14 in a meta-analysis reported that patients treated with dexamethasone experienced comparatively lesser postoperative pain, required less opioids in postoperative period, had longer time to first analgesic dose, and needed less rescue analgesia. They concluded that perioperative single-dose dexamethasone was associated with small, but statistically significant analgesic benefits.

Intramuscular route is one of the most commonly used one when a steroid injection is prescribed in outpatient settings. Intramuscular dosing studies have suggested that this route can be effective if a single dose is given either preoperatively or postoperatively.1

In our study, IM dexamethasone 4 mg given half an hour preoperatively showed a significant reduction of swelling and pain on 1st and 3rd postoperative days as compared with the controls, which comes in agreement with the previous studies.1,5,9,15,16

An important finding was the significant reduction of trismus on all postoperative visits, which is in contrast with the previous studies. Further research is, however, needed to confirm these results.

Overall, the comparable results obtained show that submucosal dexamethasone is an effective alternative to systemically administered dexamethasone. The expertise of the surgeon and the discomfort caused to the patient are factors that may limit the use of IM route. Submucosal dexamethasone, on the contrary, is simple, less invasive, and painless. It is well suited for third molar surgery and provides a low-cost solution for the typical discomfort associated with extraction of impacted third molars.

In this study, inj. dexamethasone sodium phosphate was used as an adjunct to reduce postoperative sequelae following surgical removal of impacted third molars.

This study provides a basis for preoperative administration of dexamethasone in a subtherapeutic dose of 4 mg to reduce the intensity of postsurgical sequelae, such as pain, swelling, and trismus.

This study also compares two routes of administration of dexamethasone; the comparable results obtained show that submucosal dexamethasone is an effective alternative to dexamethasone given systemically. It offers a simple, painless, less invasive, and cost-effective solution for typical discomfort associated with surgical extraction of third molars.