In today's era, HIV/AIDS cases are increasing at tremendous pace, accounting to many deaths in the developing countries like India; AIDS is the end stage of HIV infection, which is caused by the HIV virus and is a life-threatening condition. There are two types of patients with HIV infection.1 A section of patients are unaware of their own infection, but the second section of patients hide their disease status because of social stigma. Health care workers (HCWs) including dentists are under risk of contamination as strict protocols are not followed. The HCWs should incorporate a healthy attitude toward persons suffering with HIV infection/AIDS. Therefore, a thorough knowledge, awareness, and behavior play an important role toward the medical and dental care of HIV-infected individuals.

In general, HIV is very rarely transmitted during oral health care treatment.2 Detection of HIV infection is important as lesions are usually seen orally during the first stage of the disease.3 The oral manifestations occur as an outcome of the compromised immune system. The medical and dental care of HIV infection/AIDS patients requires proper understanding of the disease, modes of transmission, oral manifestations, etc. The goal is to improve the quality of patient's life by analyzing, identifying, and improving their health.4 The present study aims to assess the knowledge, awareness, and behavior of medical and dental interns toward HIV infections/AIDS patient encountered during routine medical and dental care.

A total of 350 interns participated in the study, out of which 250 dental interns were from People's College of Dental Sciences and Research Centre and People's Dental Academy and 100 medical interns from People's College of Medical Sciences, Bhopal, India. A questionnaire containing 25 multiple choice questions, in which the students had to choose only one answer from the provided list of options, was given to the participants. This questionnaire included questions pertaining to knowledge, awareness, and behavior while handling HIV infection/AIDS patients during routine medical/dental care. The students received an explanation of how to fill the questionnaire.

Graph 1 indicates the distribution of number of dental (71.43) and medical interns (28.57) in the study. Few questions pertaining to knowledge are described in Graph 2 with response given by medical and dental interns (Table 1). 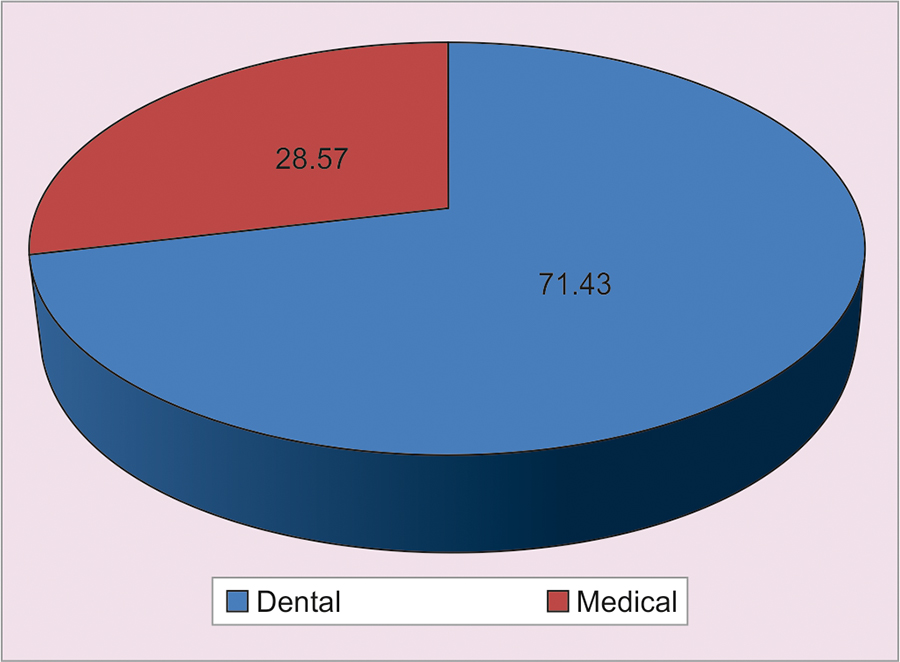 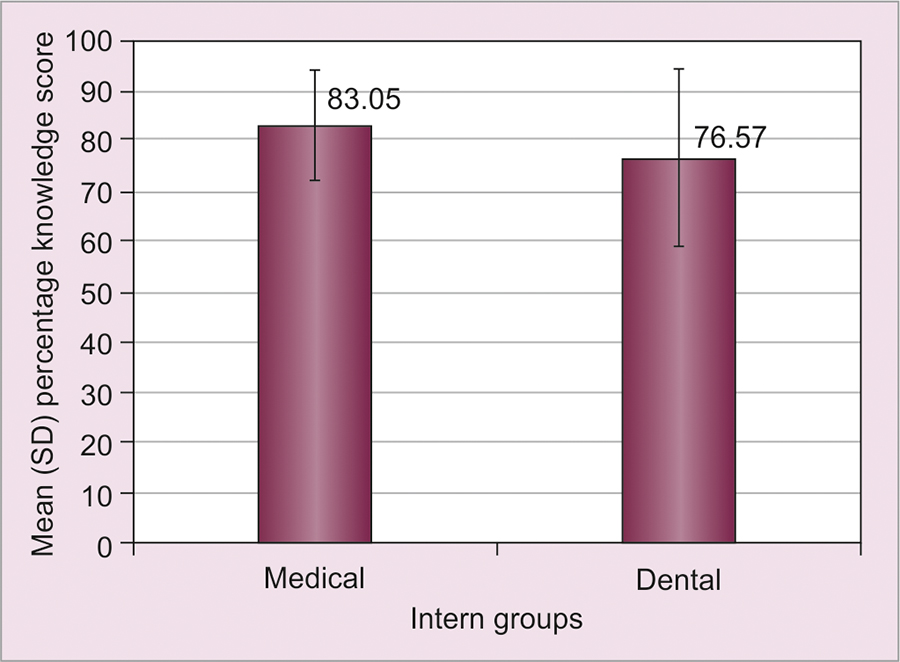 Comparison of percentage knowledge score between dental and medical interns

Comparison of percentage awareness score between dental and medical interns

Data were entered in Microsoft Excel 2016. Responses by interns were dichotomized as correct responses and wrong responses. Frequencies, percentages, mean, SD, minimum and maximum values of responses were calculated. To compare responses of dental and medical interns, Fisher's exact test was applied. To calculate knowledge score for 12 knowledge-based questions, correct response was given score 1, whereas wrong as well as no responses were given score 0. To facilitate the comparison, scores were converted into percentages. Shapiro—Wilk test showed that percentage knowledge scores did not follow normal distribution. Hence, Mann—Whitney U-test (nonparametric test) was used for comparison of knowledge scores between dental and medical interns. Wilcoxon signed rank test was used to compare the awareness and behavior scores of dental and medical interns; p-value of <0.05 was considered statistically significant. Data analyses were performed using version 21.0 of the Statistical Package for the Social Sciences (IBM Corporation, Armonk, New York, USA).

The awareness score between the dental and medical interns showed that dental interns (82.34) showed slightly better awareness to the HIV patients than medical interns (81.00). Wilcoxon signed ranks test was used. It was not statistically significant (Tables 3, 4 and Graph 4).

Comparison of percentage behavior score between dental and medical interns

Our study about the responsiveness on knowledge, awareness, and behavior about medical and dental care in HIV infection/AIDS patients shows that majority of students have adequate knowledge regarding the modes of transmission and regarding sterilization protocols. Medical interns, when compared with dental interns, did not agree that adequate awareness has been created in our society regarding HIV/AIDS. Mukhopadhyay et al5 in a survey on college students observed that <60% had satisfactory knowledge on AIDS. Knowledge is an important factor that may be related to behavioral change.4 Educational programs designed to increase knowledge will have an effect on behavior and will prevent the spread of HIV infection.6 Student's attitude toward HIV-infected individuals is variable. Their attitude can be changed over a period of time by proper education and sensitization about HIV infection/AIDS. Further emphasis needs to be given through workshops and seminars. Anuradha and Lakshmi6 in a study showed that, out of total of 144 students from 1st year, i.e., 100 from medical and 44 from dental courses, 93.75% of students knew that it is transmitted through unprotected sex, 91.6% knew that it may spread by blood transfusion, 77% knew about vertical transmission from mother to fetus, and 84.7% had the knowledge about spread through infected IV needle and drug abuse. The majority of students (67.3%) knew the meaning and abbreviations of HIV/AIDS. A large number of students (93.75%) were aware of the mode of transmission through unprotected sex. In a study conducted by Albujeer et al7 in 600 students, he found that the knowledge of about half of the medical students (54%) was at an intermediate level and of 27.1% students was at a good level; more than half of the dental students (68.2%) had an intermediate level and 10.5% had a good level of knowledge. The level of attitude of medical students was 14.7% at an intermediate level and of dentistry students was 21.4% at an intermediate level. Precaution while dealing with HIV infection/AIDS patients is also a matter of concern. In a study carried out by Al-Naimi and Al-Saygh,8 it was seen that 90% of the students were using all three types of barrier techniques.

Health care professionals play a crucial role in prevention and control of HIV infection/AIDS, and it is necessary to assess knowledge and behavior of health care professionals for overcoming ignorance and spreading awareness.10 Appropriate training can expedite learning of affirmative behaviors and attitudes toward HIV/AIDS patients among medical/dental students. This study necessitates the need for a more thorough assessment of student's knowledge, awareness, and behavior among the student groups.

The cross-sectional survey showed that medical students had better knowledge but dental interns had better awareness, though both were statistically not significant.

The medical interns had better behavior score than dental interns, which was statistically significant.