Various mucogingival procedures have been used to achieve root coverage and augment attached gingiva, including laterally positioned flaps, semilunar coronally positioned flaps, free gingival grafts, as well as guided tissue regeneration (GTR) and connective tissue grafting.1-6 Treatment of gingival recession defects with pedicle flaps results in a long junctional epithelial attachment,7 but shows good root coverage and keratinized tissue augmentation as the pedicles have their own blood supply. Placement of a free gingival graft results in regeneration of cementum, bone, and connective tissue attachment.8 New bone and new cementum formation are observed with GTR.9 However, in a recent review, Danesh-Meyer and Wikesjö10 mentioned that GTR does not provide additional clinical benefits over connective tissue grafting or advanced flap procedures and can be hazardous than helpful for the clinician in controlling primary wound closure, membrane exposure, space maintenance, and unacceptable foreign-body reactions. Furthermore, connective tissue grafts over gingival recession defects have shown periodontal regeneration.11-13

Double-papilla laterally positioned flaps for the treatment of gingival recession were first described by Wainberg in 1964 and refined by Cohen and Ross in 1968.14

A 29-year-old female patient reported to the dental clinic with a long appearance of upper front teeth. On examination, multiple gingival recessions were seen in the upper anterior teeth. The patient was highly concerned about the long appearing upper right central incisor, which had Miller's class I recession defect. The recession defect was deep-wide recession, measuring 7 mm deep and 5 mm wide, with lack of keratinized gingiva (Fig. 1). Patient insisted treatment only for this particular tooth. 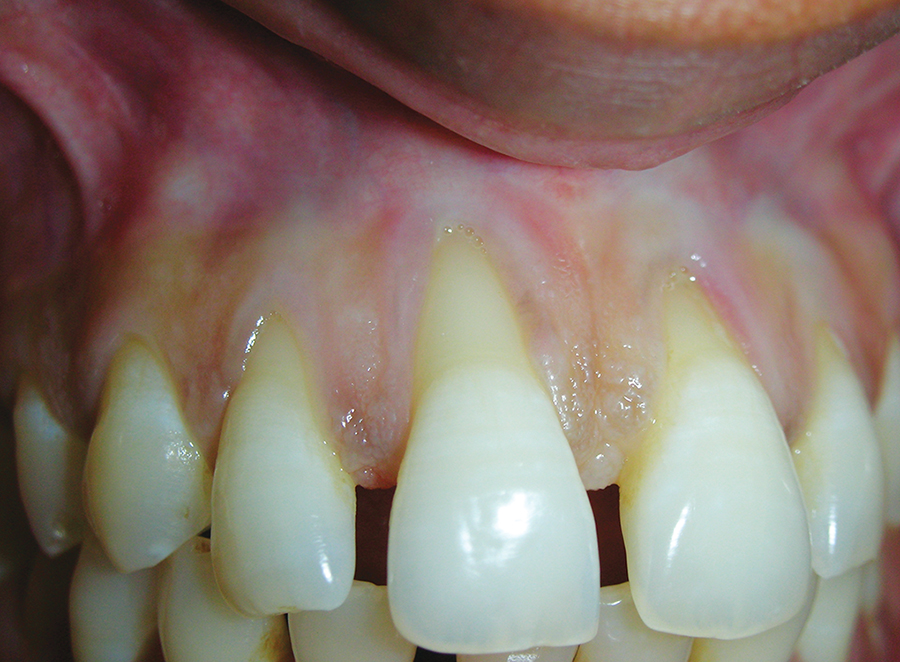 As the adjacent papillae were wide, double-papilla flap was planned and increase in the width and thickness of the keratinized gingiva was intended, connective tissue graft was utilized.

A full thickness flap was raised till the mucogingival junction beyond which a sharp dissection was made to raise a combined full—partial thickness flap (Fig. 2). The flap was extended well beyond the mucogingival junction to relieve the tension when placed over the connective tissue graft. The root was thoroughly planed and convexities of the root were reduced. At this stage, the desired dimension of connective tissue graft was procured from the patient's palate using the technique suggested by Bruno15 and sutured over the recipient recession site (Fig. 3). The mesial and the distal pedicles were sutured together in the midline, placed over the connective tissue graft, and secured to the interdental papilla. Vertical releasing incisions were sutured (Fig. 4) and periodontal pack was placed. The patient was recalled for suture removal after giving postoperative instructions and medication. The sutures were removed on the 12th day, which showed good augmentation of keratinized gingiva and root coverage (Fig. 5). The patient was told not to brush in that area for 1 week and to maintain hygiene using chlorhexidine mouthwash. The 13th month follow-up showed Cairo's root coverage esthetic score (RES) value16 of 6 with good periodontal health with increase in thickness and width of keratinized tissue and root coverage of up to 5 mm (Fig. 6), satisfying the patient's esthetic needs. 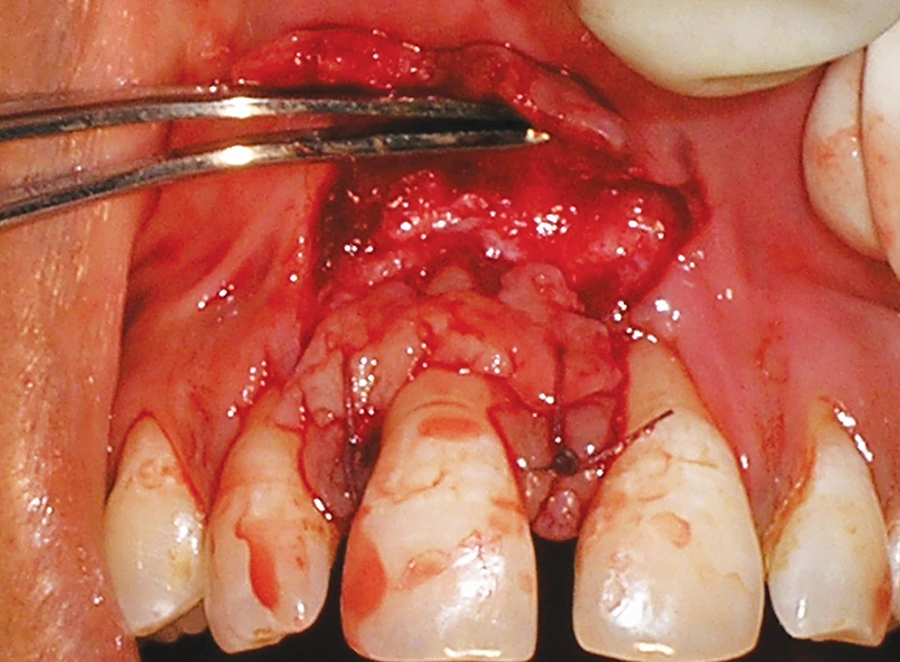 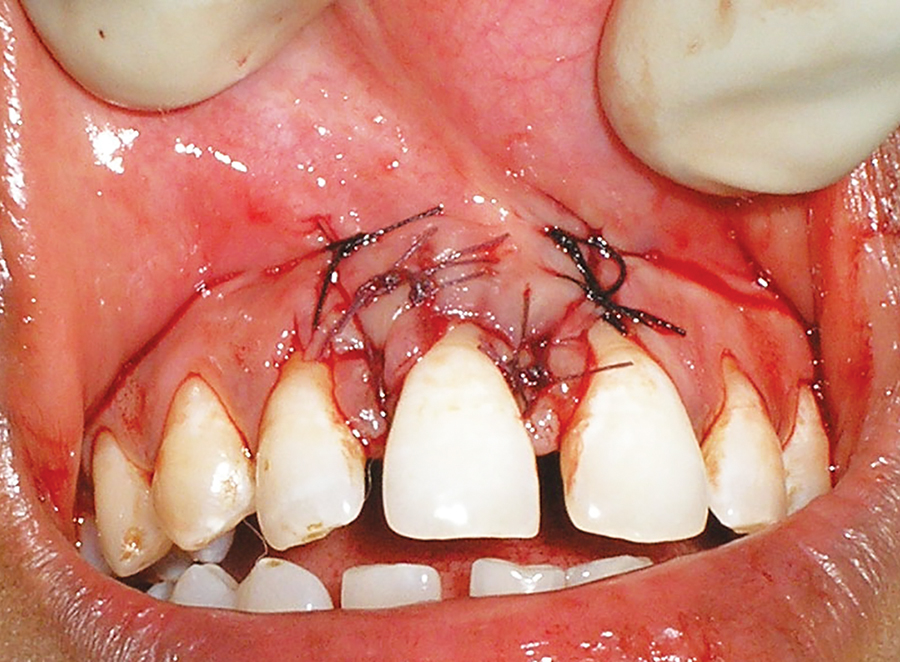 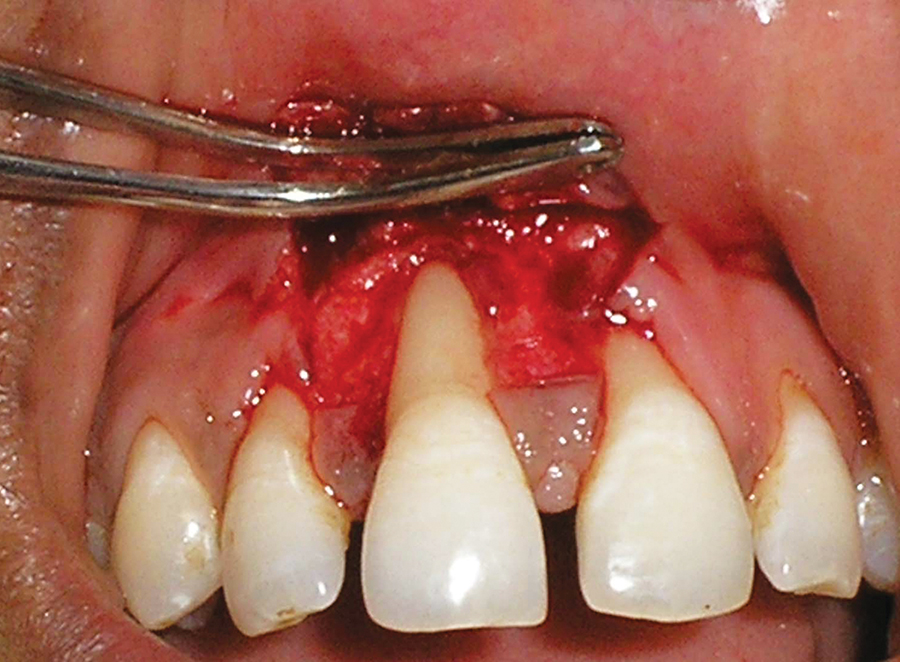 Day 12 postoperative picture at the time of suture removal 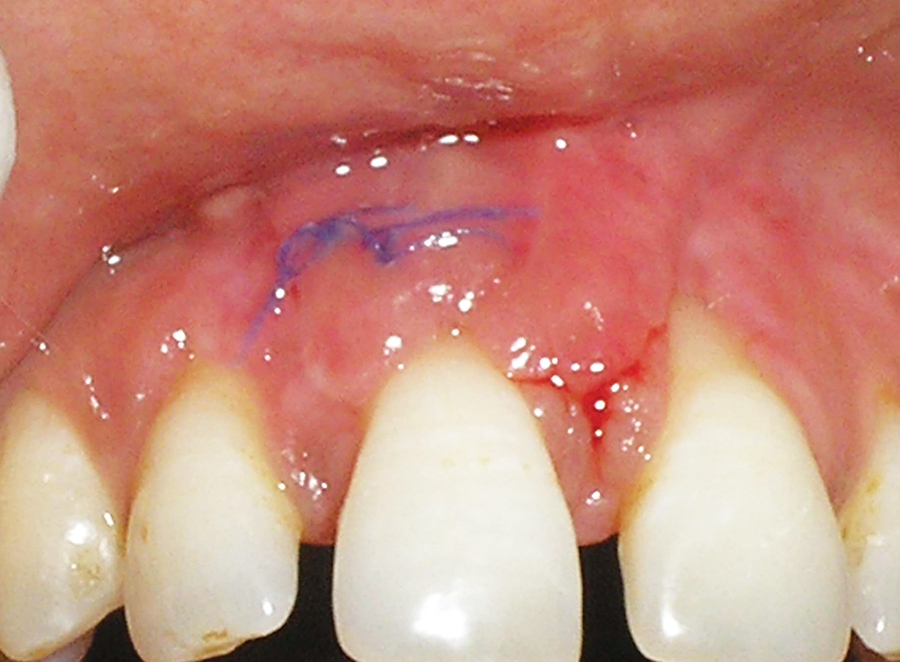 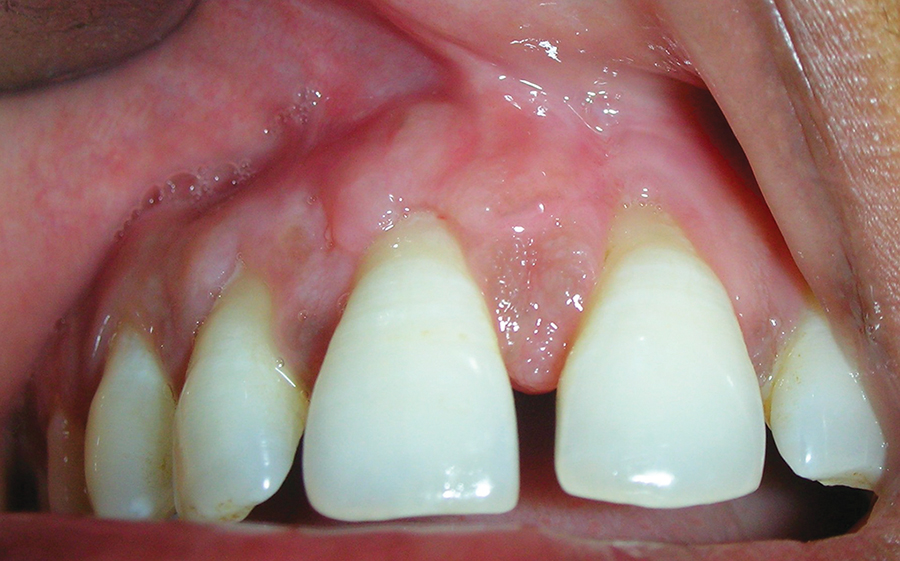 In recent times, with the proper case selection and the appropriate technique from the various treatment options available, root coverage has become more predictable. Although multiple gingival recessions were observed in this case, the patient was mainly concerned about treatment for the upper right central incisor. A double-papilla flap was chosen as the interproximal papillae adjacent to the recession were sufficiently wide, attached gingiva on an approximating tooth was insufficient to allow for a laterally positioned flap, and periodontal pockets were not present.14 Since the recession was wide and deep and augmentation of keratinized gingiva was intended, connective tissue grafting was combined in the present case. In this report, Cairo's RES scoring system16 was used for an objective way of measuring the treatment outcome with RES value of 6.

The root coverage achieved was structurally, esthetically, and functionally stable at 13 months follow-up. Patient was extremely happy with the treatment outcome and the procedure seems to be a promising treatment option for root coverage and augmentation of keratinized gingiva.