The root canal is a complex system of finely tuned and synchronized small tributaries that take many intricate shapes and configurations before reaching the tooth apex.1 Variations in root and root canal morphology can be found associated with any tooth with varying degree and incidence.2 So a complete knowledge of the intricate internal root anatomy and complex root canal system is the basic prerequisite for successful endodontic therapy.

Numerous studies have been done to reveal a wide variation in the number of roots and canal pattern in mandibular canines and mandibular premolars.2 The old concept of the basic anatomy of these teeth comprising only one root and one large canal has been outdated. Current knowledge on root and root canal morphology is based on research findings and individual case reports.3

Mandibular premolars have been commonly noted with an atypical anatomy.4 The mandibular first premolar often known as the “Endodontists enigma” (Slowey)5 presents the greatest difficulty of all teeth to perform successful endodontic treatment.5 These extreme variations in root canal morphology have resulted in high flare-up and failure rates. This is because they are anatomically unpredictable and often present with a wide variety of morphological rarities. One such morphological oddity is the presence of two roots, with a reported incidence of 1.8%.5 This accessory root of mandibular first premolar was described as Tomes' root by Scott and Turner.5 Apart from the mandibular premolars, among the single-rooted teeth, variations in the internal and external morphological in the mandibular canine have been reported in the literature. Approximately 15% of the cases reported the presence of two canals in the lower canine, very rarely the presence of two different angulated roots was reported.6

A 60-year-old female patient reported to the Endodontic Department presenting with severe pain in the lower left anterior region. On detailed case history, the patient complained of spontaneous pain that did not relieve on medications. No relevant medical history or dental history was present. Clinical examination revealed an extensive caries on the distal aspect of the mandibular left canine, which was tender to percussion. Grade I mobility was noted in respect to the involved tooth. Periodontal examination revealed no periodontal pockets in relation to the mandibular left canine. The diagnostic radiograph of the involved tooth (#33) showed deep caries encroaching the pulp with periapical changes and a vague unusual morphology of the root canal system (Fig. 1A). Additional radiographs were taken at different angulations, which revealed the presence of two distinct roots. The diagnosis of irreversible pulpitis was made and endodontic therapy was scheduled for the involved tooth. 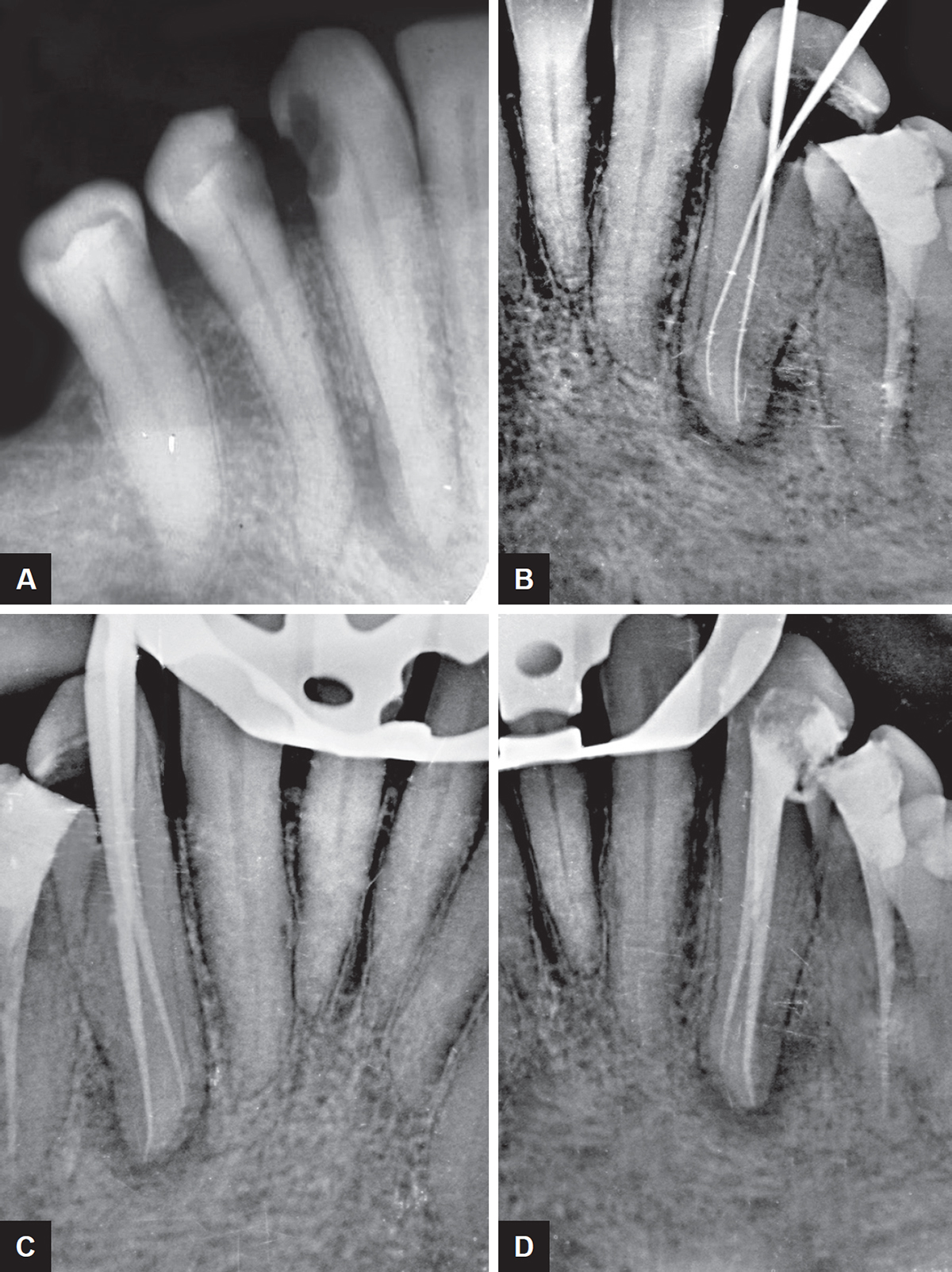 Nonsurgical endodontic therapy was initiated with the administration of the local anesthetic and rubber dam isolation, which was stabilized using wedjets. Caries was removed and the pulp chamber was accessed using endo access bur #1 (Dentsply, Maillefer, Switzerland). The access cavity was extended lingually and was defined using a long tapering fissure bur. The canal orifices were negotiated using endodontic explorer DG-16. The canals were checked for its patency using a 10 K-file (Mani, INC, Japan). The lingual orifice was first enlarged using precurved k-files size 15, 20, and 25 (Mani, INC, Japan). Then the coronal flaring was carried out using Sx file (Dentsply, Maillefer) of the manual protaper system. Working length was determined using apex locator and was confirmed using radiographs (Fig. 1B). The buccal and lingual canals were then enlarged up to the working length using k-files size 15, 20. After initial filing with k-files to create a glide path, the canals were enlarged up to F1 (Dentsply, Maillefer) of the manual protaper system. Copious irrigation was carried out using 2.5% sodium hypochlorite throughout the instrumentation procedure. Additionally, manual agitation was done using a 6% protaper gutta-percha cone (Dentsply, Maillefer). Final rinsing of the canals was done with saline solution. The canals were then dried using paper points. Calcium hydroxide mixed with chlorhexidine was placed into the canal using lentulo spirals and a closed dressing was given. In the second appointment, the patient was asymptomatic. Calcium hydroxide dressing was removed by filling and irrigating with saline. A final rinse of 2% chlorhexidine was done and the canals were dried using paper points. Obturation was carried out using 6% size 20 (Dentsply, Maillefer) protaper gutta-percha cone (Fig. 1C) and Endo Flas (Sanlor Laboratories) was used as a sealer. A postoperative radiograph was taken which showed a satisfactory obturation (Fig. 1D).

A 28-year-old male patient was referred from the Department of Orthodontics for restorative procedures as a prerequisite for orthodontic therapy. On detailed dental history, patient had undergone root canal treatment in his right mandibular posterior tooth. On clinical examination, spacing and proclination of anterior teeth were noted. The premolars #44 and #45 were rotated and #46 was missing. A fractured temporary restoration was noted in #44. Radiograph was advised in relation to #44 and #45. The radiograph revealed an unusual morphology of the root canal system and a fractured instrument was noted (Fig. 2A). Additional radiographs were taken at different angulations, which revealed the presence of two roots in the lower right first premolar with a fractured instrument in the buccal canal. An endodontic therapy was scheduled with the patient's consent. 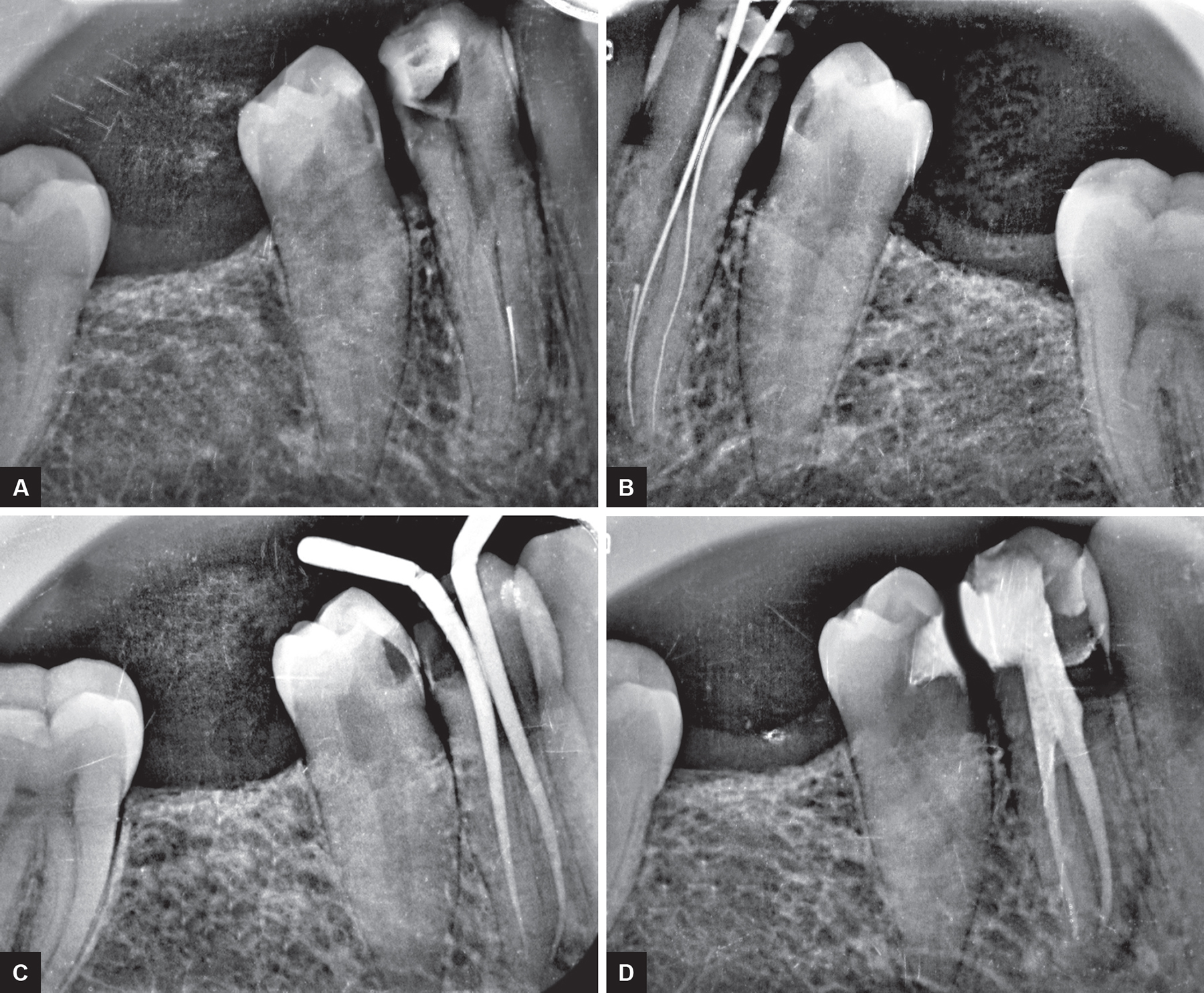 Endodontic therapy was initiated under local anesthesia and isolation was done using cotton rolls and high vacuum suction. The access cavity was prepared and modified by extending slightly lingually using an endo access bur #2 (Dentsply Maillefer, Switzerland). The lingual orifice was negotiated using DG-16 explorer. The lingual orifice was first enlarged using k-files size 15, 20, and 25 (Mani, INC, Japan). Coronal enlarging of the orifices was done using Sx file (Dentsply, Maillefer) of the manual protaper system. The patency of the lingual canal was checked and the fractured instrument in the buccal canal was bypassed using a 10 size K-file. Working length was estimated using apex locators and confirmed with a radiograph (Fig. 2B). The buccal and lingual canals were initially instrumented using k-files of size 15 and 20. Then the canals were enlarged using manual protaper system up to F1 (Dentsply, Maillefer). Copious irrigation with 2.5% sodium hypochlorite was done after each instrumentation. Saline was used as an intermediate irrigant before the final rinse with 2% chlorhexidine. Manual agitation was done using a 6% protaper gutta-percha cone (Dentsply, Maillefer). The canals were then dried using paper points. The obturation was carried out using 6% size 20 protaper gutta-percha cones (Dentsply, Maillefer) (Fig. 2C) and Endo Flas (Sanlor Laboratories) sealer. Final restoration was done after 1 week with a satisfactory obturation (Fig. 2D).

Anatomical variations, especially extra canals and extra roots, are encountered during endodontic therapy.5 In such cases, successful endodontic treatment relies on the careful interpretation of radiographs, a well-defined access preparation and detailed probing of the tooth to locate and understand the root canal system.5

Radiograph plays an important role in endodontics, as it can provide the complexity of the treatment. In all endodontic cases, it is mandatory to have a high-quality imaged intraoral periapical radiograph of the root and periradicular tissues.7 To enhance the interpretations of intraoral radiographs, it is suggested to take radiographs at different angulations, preferably horizontally, which can reflect the morphological identity of the root canal system.8

Next important step for successful outcome of endodontic treatment is the access cavity. It can be considered as the foundation of successful endodontic therapy. An error in this step would compromise all the three factors: Cleaning and shaping, disinfection, and three-dimensional obturation of the root canal system.9 In anatomic variations as presented in these two cases, it is usually possible to get a direct access to the buccal canal but the lingual canal takes a sharp deviation from the main canal, which makes the canal difficult to locate.10 Additionally, in mandibular premolars the lingual inclination directs the file buccally, hence, it is difficult to locate the lingual canal.10 To compromise such situations, it is suggested to extend the lingual wall of the access cavity more lingually.11 This makes it easier to locate the lingual orifice.

The chemomechanical preparation was carried out with manual protaper system of 6% taper and copious irrigation with 2.5% sodium hypochlorite and a final rinse with 2% chlorhexidine. Studies show that activating irrigants increase their efficiency. Manual dynamic activation with a gutta-percha cone indicated a 20% optimization for passive irrigation with 21G needle.12 In both the cases, manual agitation was done using master gutta-percha protaper cone. This simple technique disrupts the vapor lock formed at the apical third, hence, enhancing the infiltration of irrigant.

Anatomical variations of the root either in number or in shape or variations of the endocanalicular system can be encountered in any teeth.6 In a study done at the University of Washington that evaluated the failure rate of nonsurgical endodontic therapy of all teeth, about 11.45% of failure rate was seen in mandibular first premolar.5 These may be due to so many aberrations that exist in these teeth.4

It has been reported that mandibular anterior teeth exhibit more anatomical variations than their maxillary counterparts.3 In a study conducted by Quellet, about 5% of the proportion shows presence of a second root in mandibular canine.6 Pecora13 studied the internal anatomy, direction, and number of roots on 830 mandibular canine, and found out that only 1.2% had a root canal configuration of (2-2) and 1.7% of the examined teeth had two separate roots, thus showing the morphological rarity in mandibular canine.

Keeping in mind about the anatomical variations of these teeth, it is mandatory for clinicians to have a thorough knowledge of normal and unusual anatomy, precise prediction, and clinical thoroughness for successful endodontic outcome. The clinician should be able to mastermind the intricate anatomy of the canal space to render the finest treatment possible.

The essence of a successful root canal treatment is the effect created by the synergistic approach of instrumentation, irrigation, and obturation, which is followed as a golden rule in our day-to-day practice. But an important factor that precedes the above three procedures is the access cavity preparation which should be precise, properly executed, and should not be undervalued or neglected. A proper access cavity in terms of position, depth, and extent is achieved with the careful use of all available diagnostic aids, careful interpretations of radiographs with detailed exploration of the tooth to identify any variation in the anatomy. These are the essential prerequisites for a successful endodontic therapy.